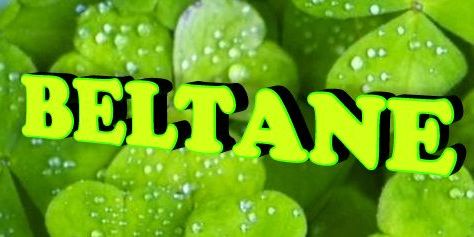 This 5th of May, 2021, Damsel and I have decided to skip the traditional “Cinco de Mayo” and celebrate “Beltane” instead. The Cross-Quarter day (midway between the spring equinox and the summer solstice) of Beltane, an ancient Celtic day of importance, occurs on May 5th this year according to the “Grand Octal Clock” which can be seen at the Archaeoastronomy.com website.

So, to celebrate the Celtic First Day of the Summer Season, we will be preparing a traditional Irish dinner of Corned Beef and Cabbage along with some boiled vegetables. I know, we just had that on March 17th for St. Patrick’s Day, but we like to have this meal more than once a year.

I discussed our Irish Ancestry in a post on St. Patrick’s Day last year. I also have English, Welsh, Scottish and some other mixed Northern European heritage along with a couple of Italians and one Choctaw great6th grandmother. Doing the math, that Indian ancestor qualifies me for Native American heritage benefits four times greater than Senator Elizabeth “Fauxcahontas” Warren. Of course, I wouldn’t do that – I’m not a Democrat.

So, since neither Damsel nor I have any Hispanic Genealogy, we will probably be more inclined to celebrate Beltane than Cinco de Mayo in the future on May the 5th. That being said, we will still, of course, indulge in Tex/Mex Cuisine from time to time.

Happy (Insert Your Preferred 3/5 Celebration Here) to you! 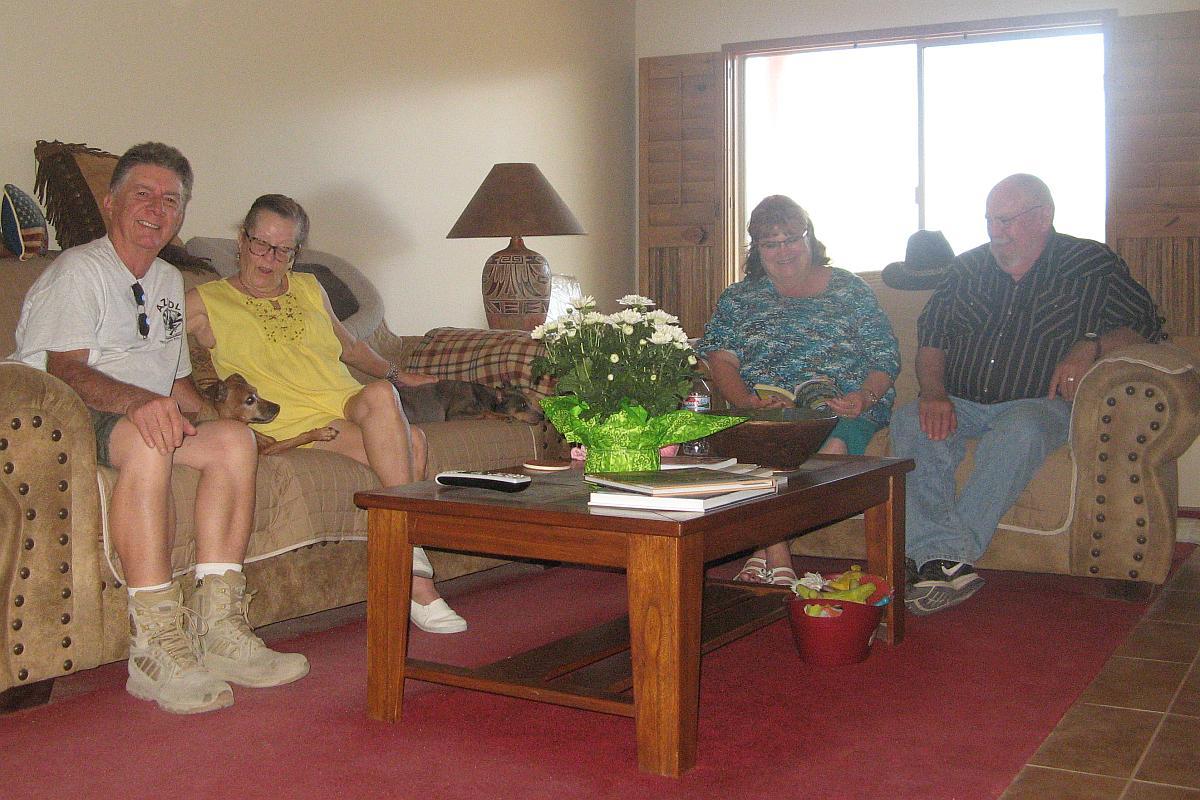 Long time reader and commenter Crotalus and his wife stopped by this afternoon for a visit and tour of our humble abode. They were in Wickenburg on a little Vacation trip and took the time to get in touch with us to set up the visit.

We previously met up with Crotalus when we were camped in Palm Desert. At that time he presented us with some specimens from his cactus collection to add to ours. We sincerely appreciated the gift cacti and they are doing well here.

We enjoyed the visit and were pleased to show them around our place. We parted company with an open date to get together again, possibly for dinner. We wish them a safe trip back home and look forward to our next encounter. 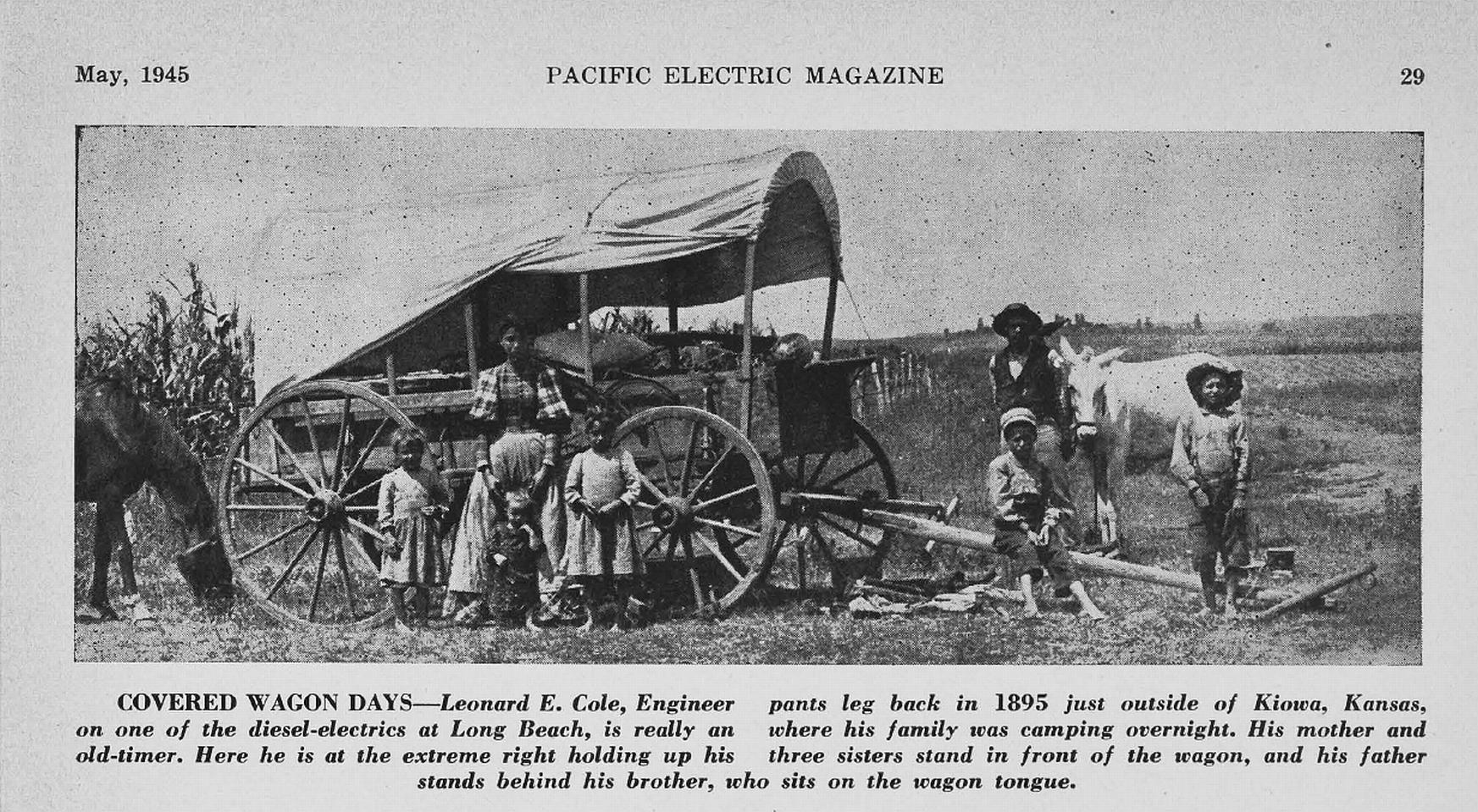 Having made the decision to locate and visit the graves of some of our ancestors before and after the eclipse, we have been doing some research using several genealogy websites. We have plans to visit two different cemeteries in Colorado during our excursion; one in Montrose, Colorado and another in Pueblo, Colorado. Thus far, we have located a dozen family graves to visit. Five of those family are direct ancestors.

Someone unknown to me uploaded a similar image to the one above to one of the research sites I visited. The uploaded image was crooked and cropped such that I couldn’t read the entire message below it, so I did some additional digging and found a photocopy of the original magazine in which the image appeared and was able to render the improved image seen above.

The image itself appeared in a company magazine of the Pacific Electric Railway in 1945. My grandfather, the kid on the right, was an engineer on the line back then. The couple with the wagon, mules and kids were my great grandparents, Eugene and Emma. The other kids in the photo are my great uncle Clark and great aunts Melissa, Bernice and Myrtle. I remember visiting a farm in Western Colorado as a kid and meeting Great Aunt Myrtle. I knew my great grandmother Emma and in fact attended her funeral in Montrose in 1960.

I have to say that it was a very pleasant surprise to discover this ancient photo in my research. Click on the image to enlarge (use the scroll bars to view the complete photo). 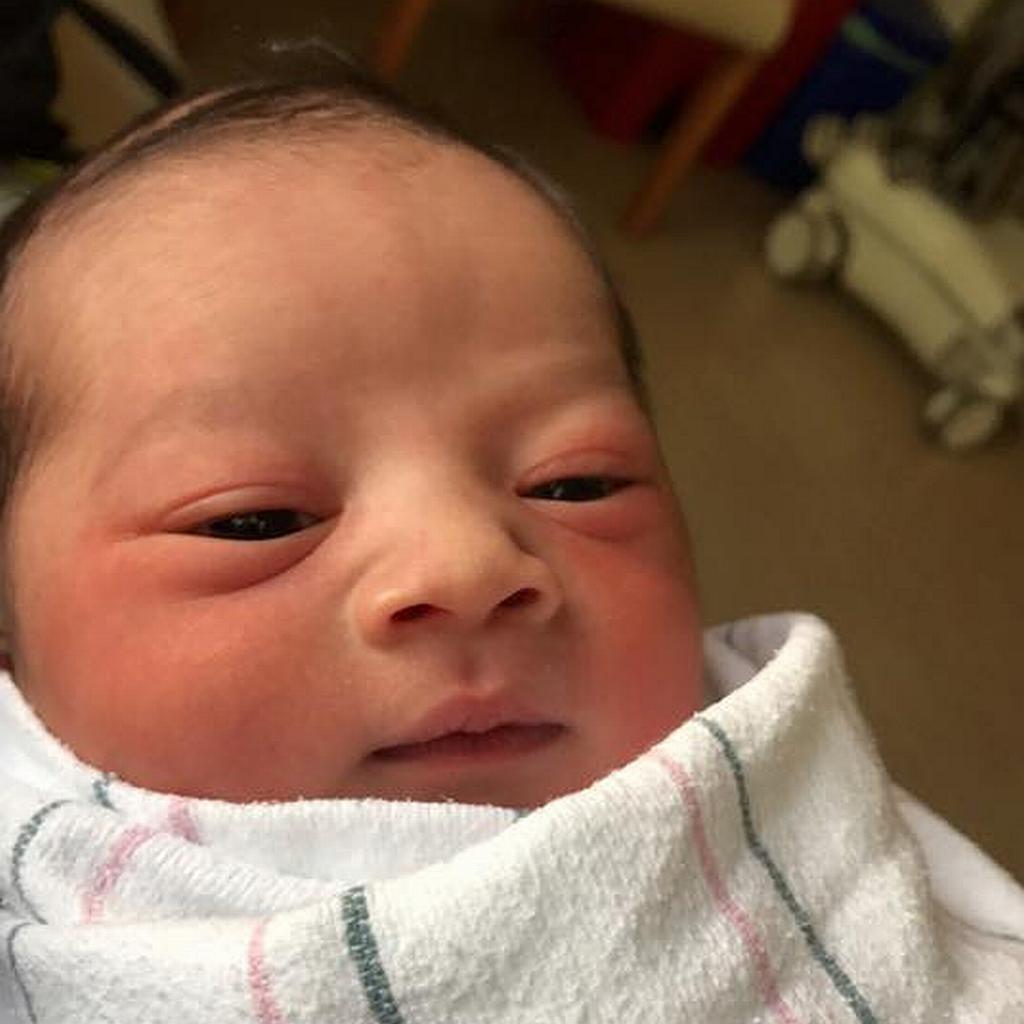 We will formally meet the little one early next month when we take our spring excursion to Northern California to visit family. After that, we will take the long, scenic way home.

The other granddaughter, mother of our great grandson has also announced a new arrival due in November of this year. We’re going to be busy doting for a while. 😉 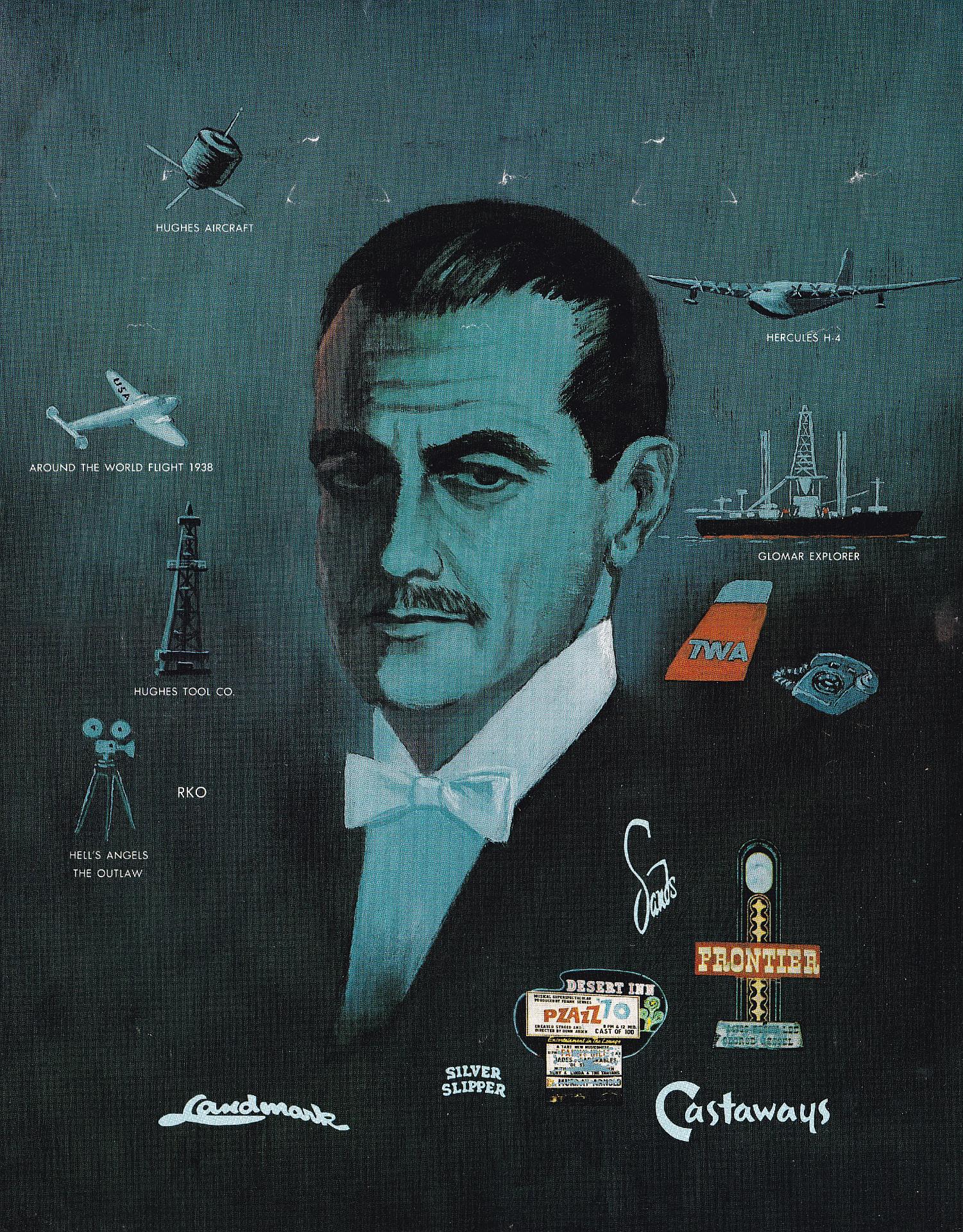 I found the long-lost poster seen at the right today when I was opening a picture frame to scan in a certificate I earned in my Ham Radio activities (DXCC for those who know) and found the poster was in the same picture frame. Frankly, I cannot remember putting it in there, but there it was in near-perfect condition. I scanned in my certificate (for another purpose) and also this poster, since I was scanning.

IMAGE: Iconic Howard Hughes portrait along with some of the Hughes legacy icons. Click on the image to enlarge to poster size.

Since I was suddenly dropped into the topic of the famous Howard Robard Hughes, Jr., I went out to Wikipedia and looked him up. I found an extremely interesting entry about Hughes’ life and times, much of which I had been previously unaware. It was intriguing and I was riveted to reading it all the way through, disregarding the references, of course. I can’t attest to all of it being true, but since I was there towards the end of Hughes’ life, I know some of it is gospel.

I never met the man, but others I knew and trusted told me of times when they had seen him come to Culver City for various visits in which they had caught a glimpse or two of the man. He had mostly gone full reclusive after I had been there a year or two.

If you’re interested in icons like Hughes, I recommend reading the Wikipedia Article (disclaimer – I can’t guarantee any of it is true, but it IS interesting). 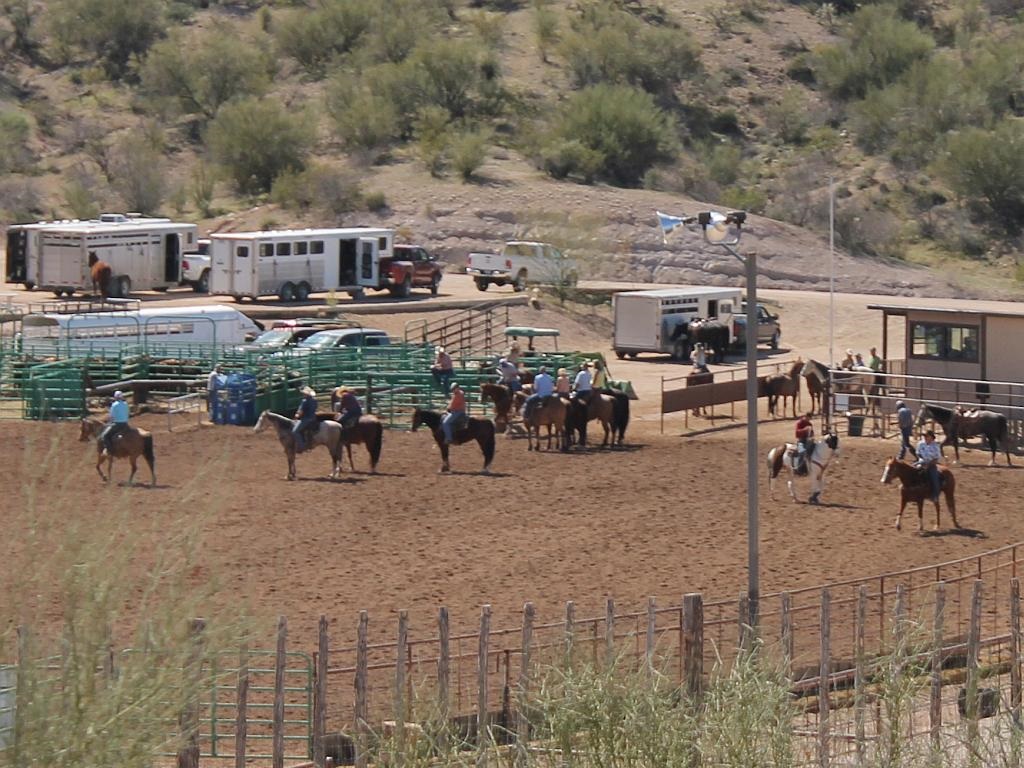 On our way up to the Wickenburg Sportsmen’s Club shooting range today, we passed the Everett Bowman Rodeo Grounds where a bunch of cowboys and cowgirls were warming up for one of the upcoming rodeo events here in town. During the winter months (and to a lesser extent the rest of the year), we see a lot of horse trailers on the roads and in the downtown and outlying arena parking areas.

We like the fact that the rodeo brings a lot of welcome commerce to our little town, even if it means more traffic on the road and more competition while grocery shopping. Both of us, although we aren’t rodeo participant types, enjoy seeing good horses and riders. We have been known to go to rodeos in the past and may do so again.