Damsel and I attended the Fly-In on Saturday morning (01/21/23). This event Changed from October to January for unknown reasons, but regardless there were lots of people in attendance. There was so much traffic and cars that we wound up parked in the boonies several hundred yards out and had to walk into the airport proper.

There were hundreds of old and special cars and dozens of fly-in aircraft. Damsel and I took a lot of photos, but only four of the more interesting ones appear below. Click on any of the photos to enlarge. 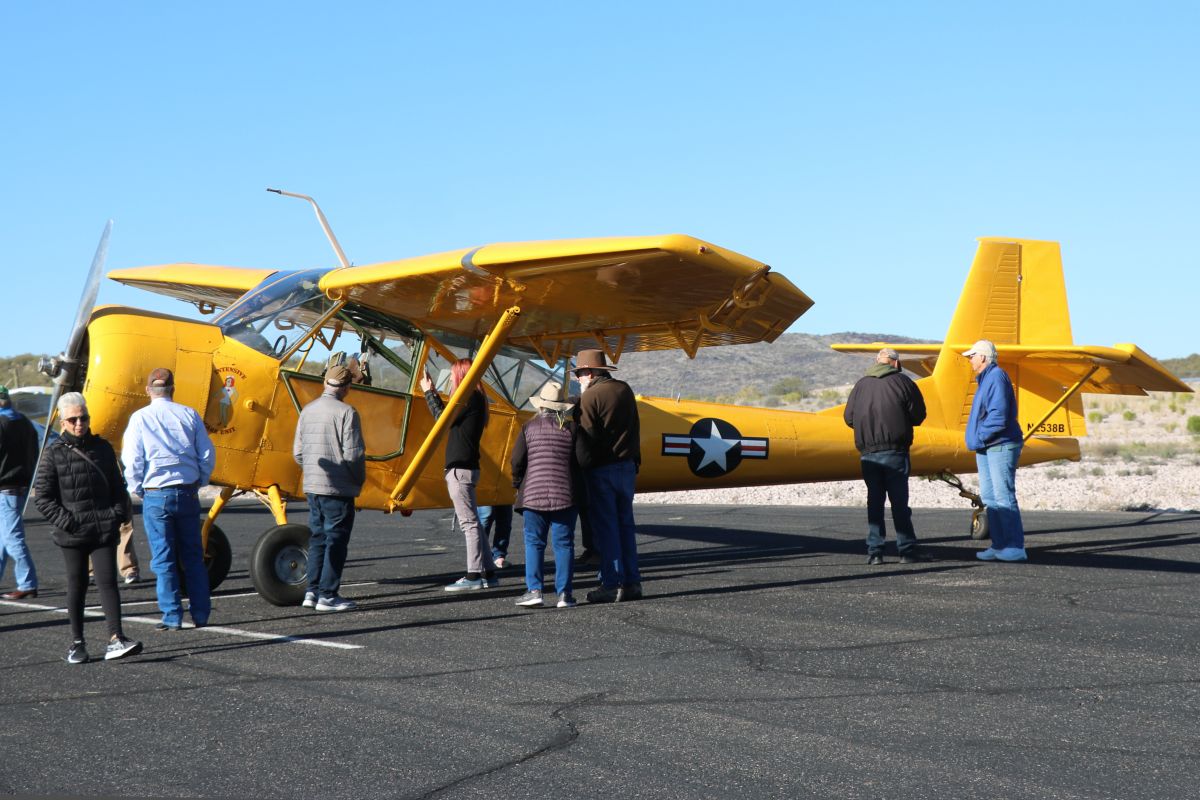 This was the most interesting fly-in of the day. It is a 1947 Consolidated Vultee (now Convair) model L-13 fixed wing single engine. The Engine is a LYCOMING R680 Reciprocating Radial producing 215 Horsepower. The Weight is Less than 12,500lbs and the cruising speed is 92mph. As you can see from the photo above (courtesy Damsel), it was a very popular exhibit. 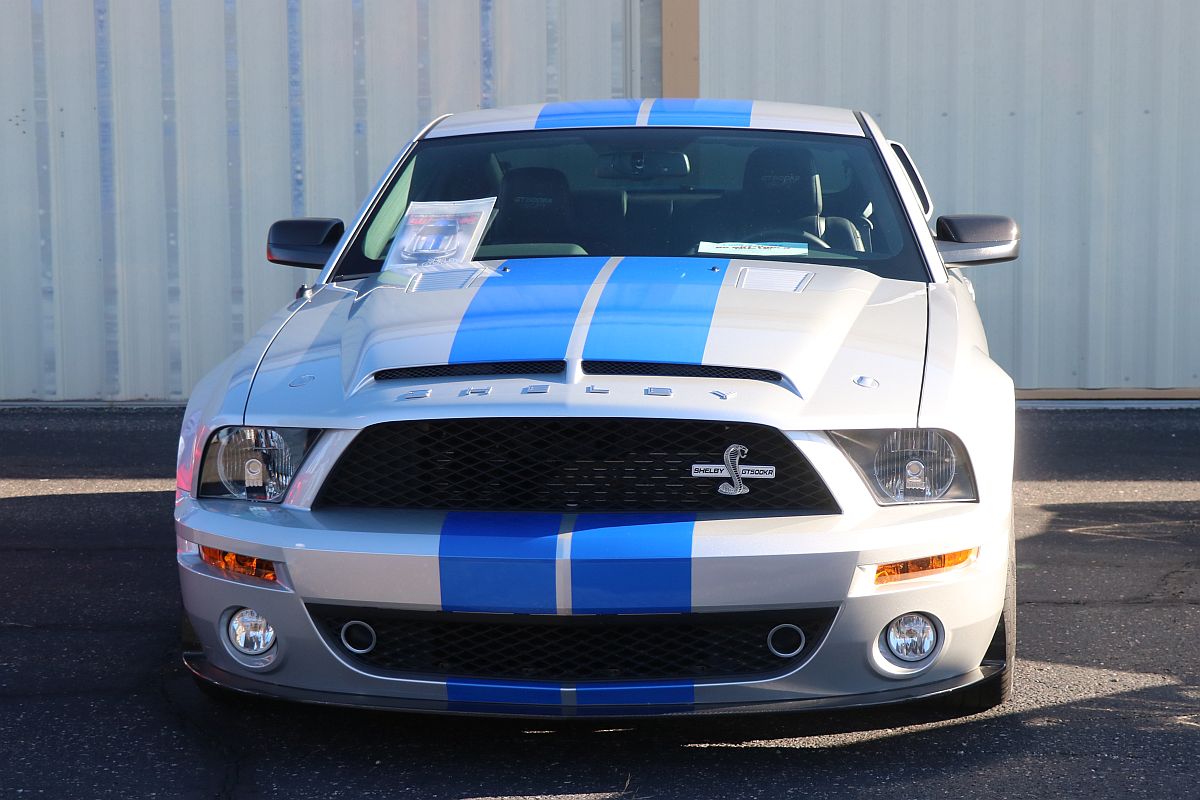 Shelby GT 500 KR. Some references to this muscle car show that these could produce 900 horsepower. That is a lot. This one was nice with blue racing stripes over light gray. Photo Courtesy Damsel. 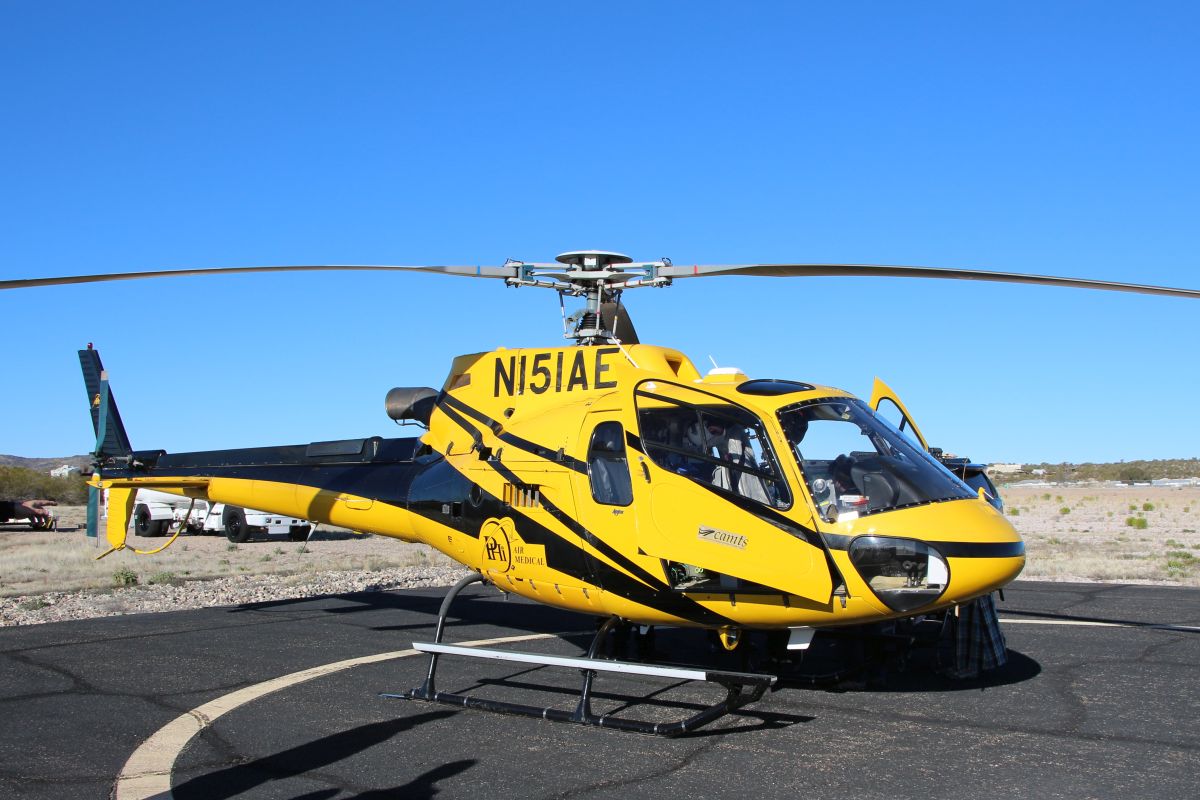 This helicopter usually parks at the helipad next to our local Wickenburg Community Hospital. We often see it flying in and out of the area since our house is less than a mile south of the helipad. It is a 2004 Eurocopter (formerly Aérospatiale) AS-350B-3 single engine air ambulance configured helicopter. I spoke with one of the pilots who said they are “keeping busy” with routine and emergency transports. 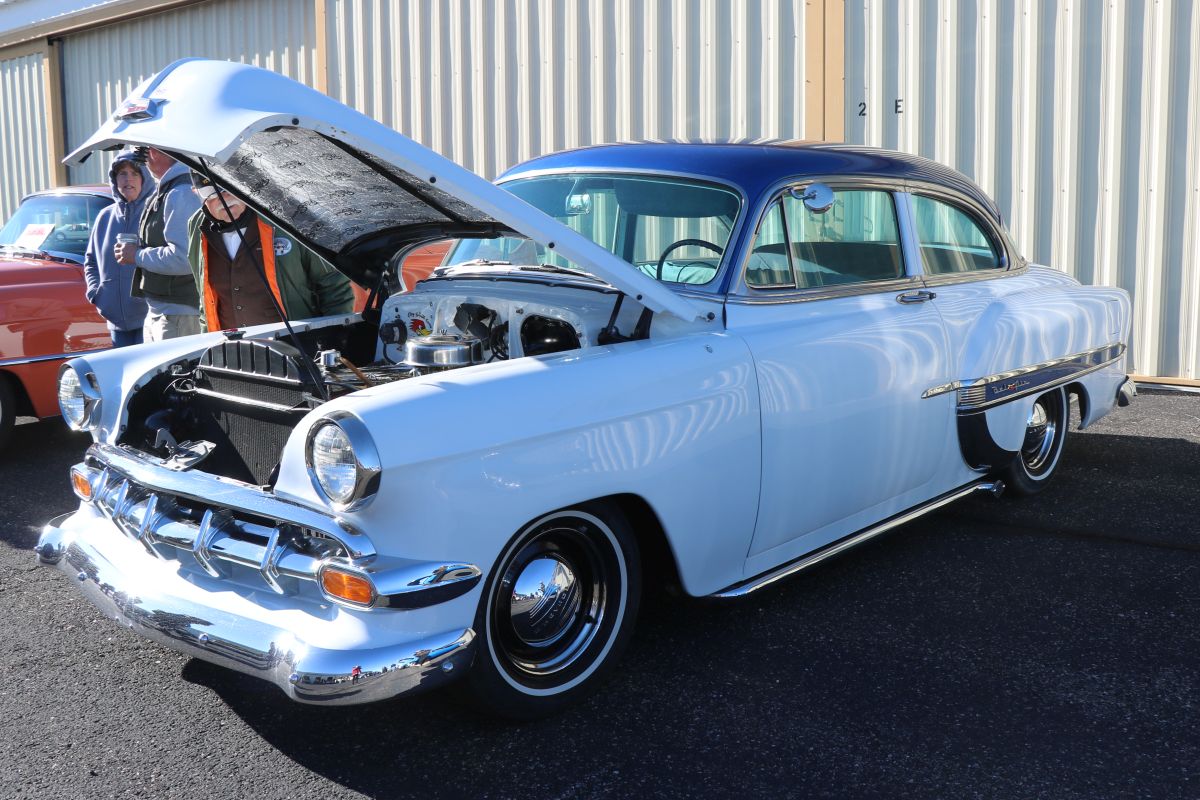 And finally, this very clean 1954 Chevrolet Bel Air Coupe was nostalgically reminiscent of the borrowed Bel Convertible I used to fetch my date to the Senior Prom in high school days (1961).

Damsel and I both had fun with our outing this year in spite of the crowds and parking situation. Our next outing will be “Gold Rush Days” in February. Stay tuned. 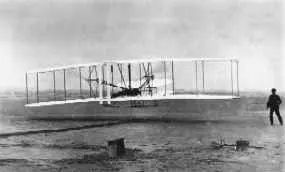 The (clickable) image above is the beginning page of my first Pilot Log Book. The page entries include my first flight lesson on December 16, 1961 and my first SOLO flight on January 9, 1962. I was just 18 years old then and managed to get my Private Pilot Certificate the following April, well before my 19th birthday in July.

When I first started flying lessons back then at the Santa Monica (CA) Municipal Airport (SMO), the cost of renting a Cessna 150 (high-wing, two-seat, tricycle gear, 100 HP) was $12/hour (including AvGas!). The Instructors fee was $5/hour for a total of $17/hour. In contrast, today the average cost per hour seems to be about ten times that, with Instructors fees upwards of $50 and airplane rental nearly $120 per hour, depending on local rates and circumstances.

In my early flying days, I checked out in a Cessna 172 (high wing, four-seat, tricycle gear, 150 HP) and puttered around locally with friends and family until it was time for me to go on active duty in the US Navy (I joined the Naval Reserve when still in high school). While at Avionics school in Millington, TN, I checked out in a Piper Tri-Pacer (high-wing) and a Piper Cherokee (low-wing) and did some local puttering around the Memphis area along the Mississippi River. After School, I reported to the US Naval Air Station, Point Mugu, CA, which was only 45 miles from the airport where I learned to fly, so I resumed flying out of SMO for the rest of the time I was on active duty.

I stayed in Aerospace as my primary occupation, but flew quite a bit as an instructor and charter pilot as a sideline. I have over five thousand hours of instruction given in all types of aircraft and ratings for which I am certified.

Ultimately, in the year 2000 or so, I became ineligible for an Airman Medical Certificate because of a prescription medication I take, which supposedly causes dizziness, a symptom which I have never experienced. Rather than fighting through the bureaucracy of the FAA’s AirMed Branch in Oklahoma City to get a waiver, I decided to hang up the flying for good because my life priorities had changed now that Damsel and I were married.

A few of my more memorable experiences:

I am proud of my aviation career but I am at a point in my lifetime that I don’t miss the flying. Besides, I have a lot of “Hangar Flying” memories and experiences that I can pass along to anyone who wants to listen. 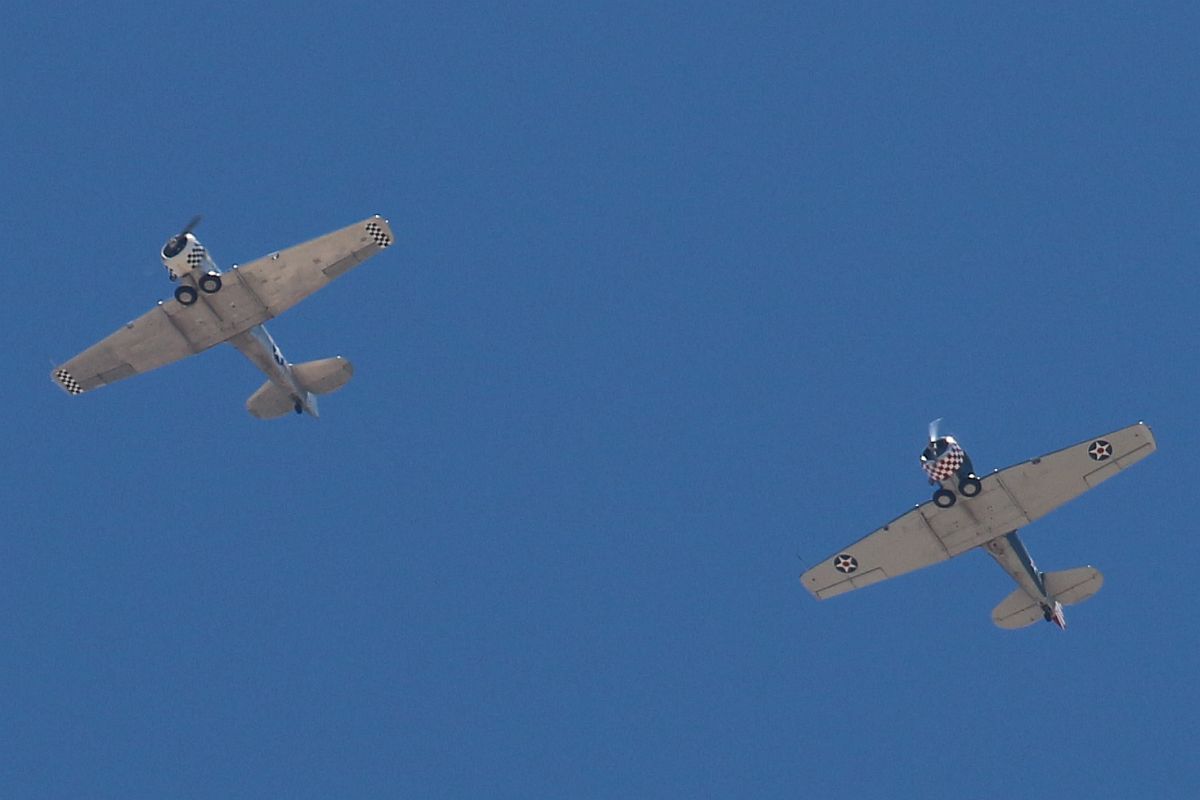 In the past, we have posted about Armed Forces Day on this blog. Our old home in K’Stan was located in a community that actually had an Armed Forces Day parade annually and we blogged about those back then. Well, today, there probably aren’t any parades out there because of the dreaded COVID-19. That’s a loss for them for sure.

The lack of parades, however, did not deter the intrepid airmen piloting the two North American AT6 Airplanes shown flying in formation above our Wickenburg home today. The resonant sound of the radial engines overhead brought us out of the house this morning and what a sweet sound it was to hear.

I managed to capture the above image of the high-flying planes as they passed over our place with the new 400mm lens. They were quite high, perhaps eight or ten thousand feet AGL. The planes made several passes over the area which was a delight to see these two nostalgic beauties as they transited the area.

We see that there have been several organized fly-overs in various places around the country, including the Phoenix area, but unfortunately not visible here. It is not known by us if this was an organized fly-over or just a couple of vintage AAF Trainers out for fun. Regardless, they were awesome.

We wish our Military Men and Women Godspeed on this Armed Forces Day and pray for their safety in harm’s way. May God bless them and their families on this day. 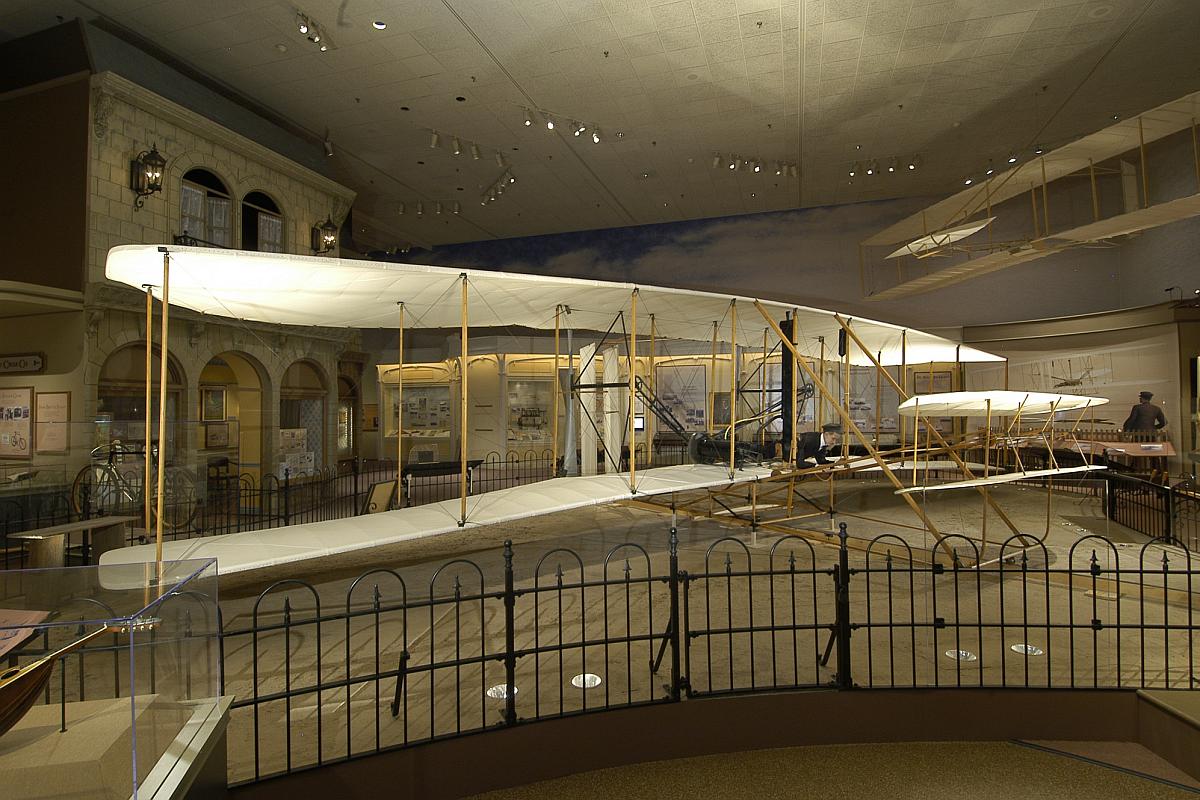 The 115th Anniversary of Powered Flight is today, December 17, 2018. This marks one of, if not the most, important technological achievements of the 20th Century. Aviation spawned an age of unprecedented achievements not only in aircraft-related, but in myriad support technologies. I am thankful to God that I was born in an age where emerging technology, my aptitude and education were responsible for a long and happy career in aerospace.

Co-incidentally, today is the 80th anniversary of my parents’ wedding. They were married on this day in 1938 in Long Beach, CA, where I was raised. They were present for the booming aviation industry in Southern California, another reason I was born into the right place at the right time. It’s too bad that I can no longer say that about what Kalifornistan has become.

From the National Air and Space Museum:

The Wright brothers inaugurated the aerial age with the world’s first successful flights of a powered heavier-than-air flying machine. The Wright Flyer was the product of a sophisticated four-year program of research and development conducted by Wilbur and Orville Wright beginning in 1899. After building and testing three full-sized gliders, the Wrights’ first powered airplane flew at Kitty Hawk, North Carolina, on December 17, 1903, making a 12-second flight, traveling 36 m (120 ft), with Orville piloting. The best flight of the day, with Wilbur at the controls, covered 255.6 m (852 ft) in 59 seconds.

The Wrights pioneered many of the basic tenets and techniques of modern aeronautical engineering, such as the use of a wind tunnel and flight testing as design tools. Their seminal accomplishment encompassed not only the breakthrough first flight of an airplane, but also the equally important achievement of establishing the foundation of aeronautical engineering.

Image and text borrowed from this Smithsonian Link. 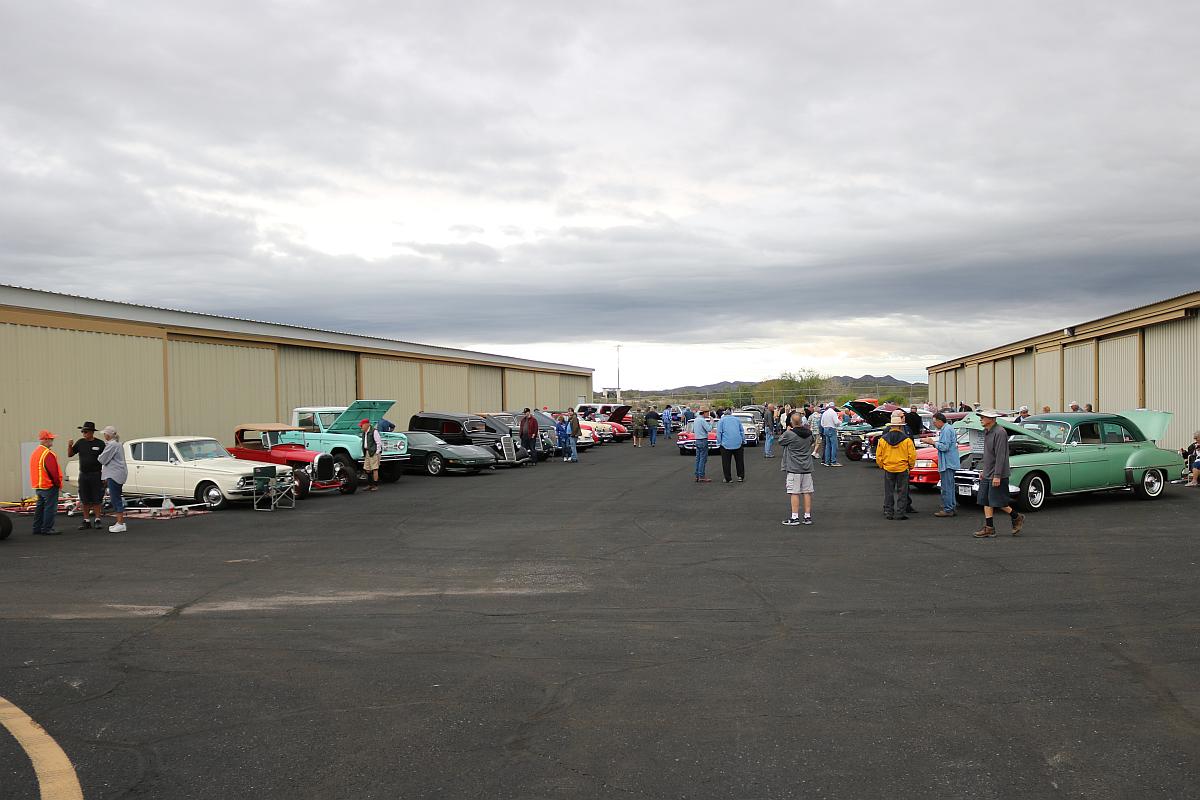 Damsel and I attended the 24th Wickenburg Annual Classic Car Show and Fly-In today. The remnants of Tropical Cyclone Sergio, however, were to cut the festivities short after about two hours into the four hour event. We got there ahead of the rain, though, and scored a souvenir T-shirt and got some pictures. The impending rain caused many of the previous fly-ins to stay at home, so the exhibits were limited today. 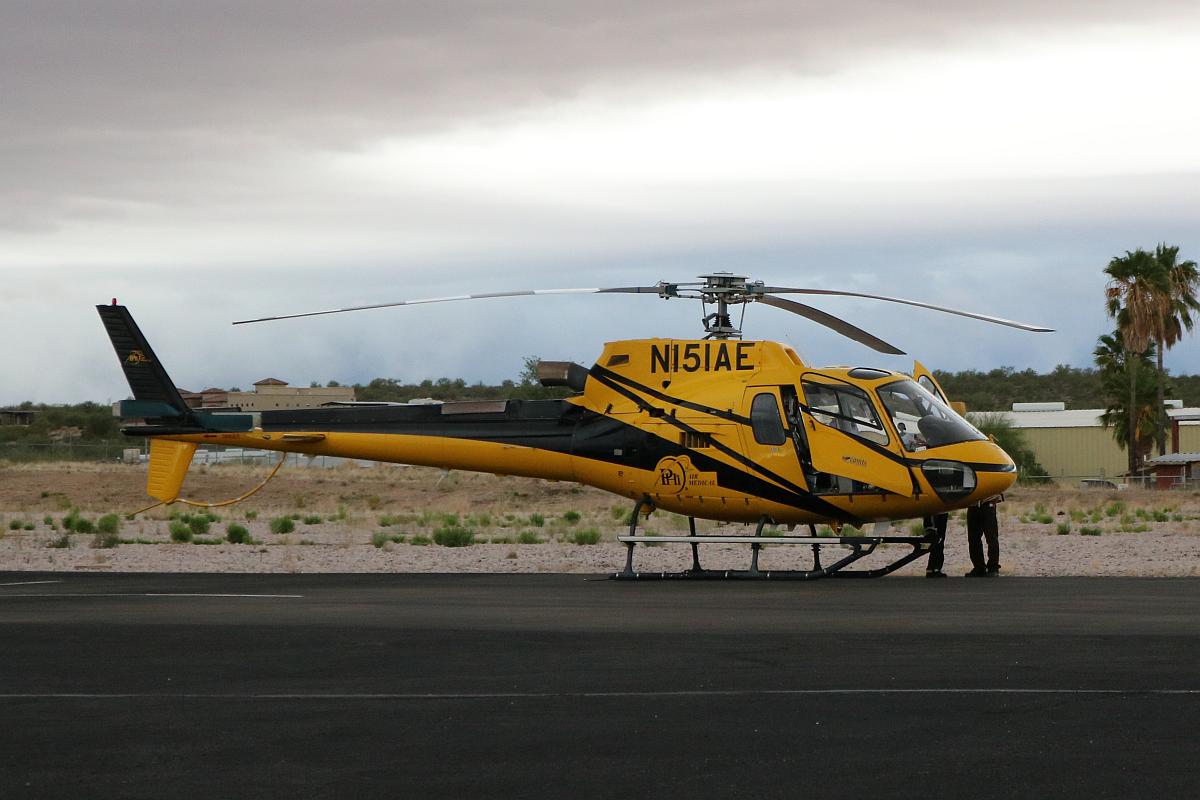 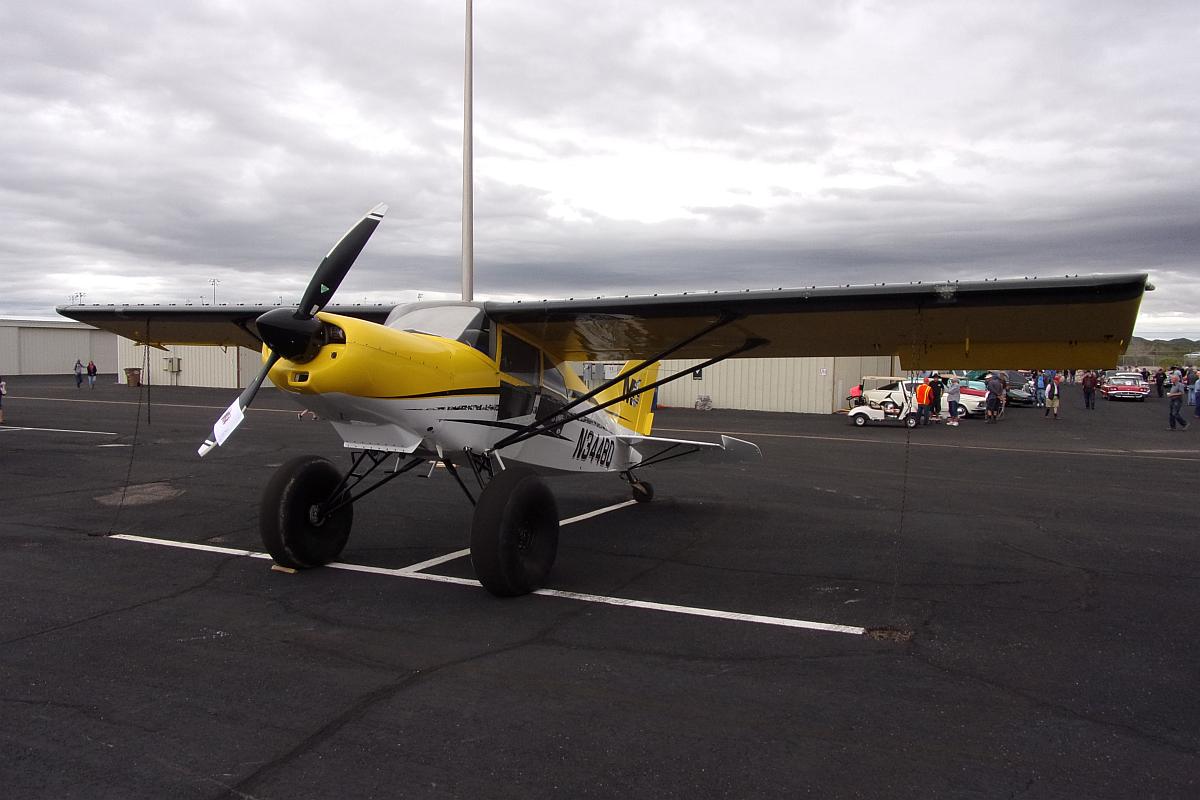 The helicopter (above left) is normally parked at the Wickenburg Hospital Helipad when it isn’t airborne in an air ambulance capacity. On the right with the oversized tundra tires is a Maule M6 short takeoff and landing (STOL) airplane. With a 235 HP Lycoming engine, this plane is capable of lifting off before you pass the first set of runway lights, and will land in rather confined areas with an approach speed of 45 MPH with 50° flaps deployed. 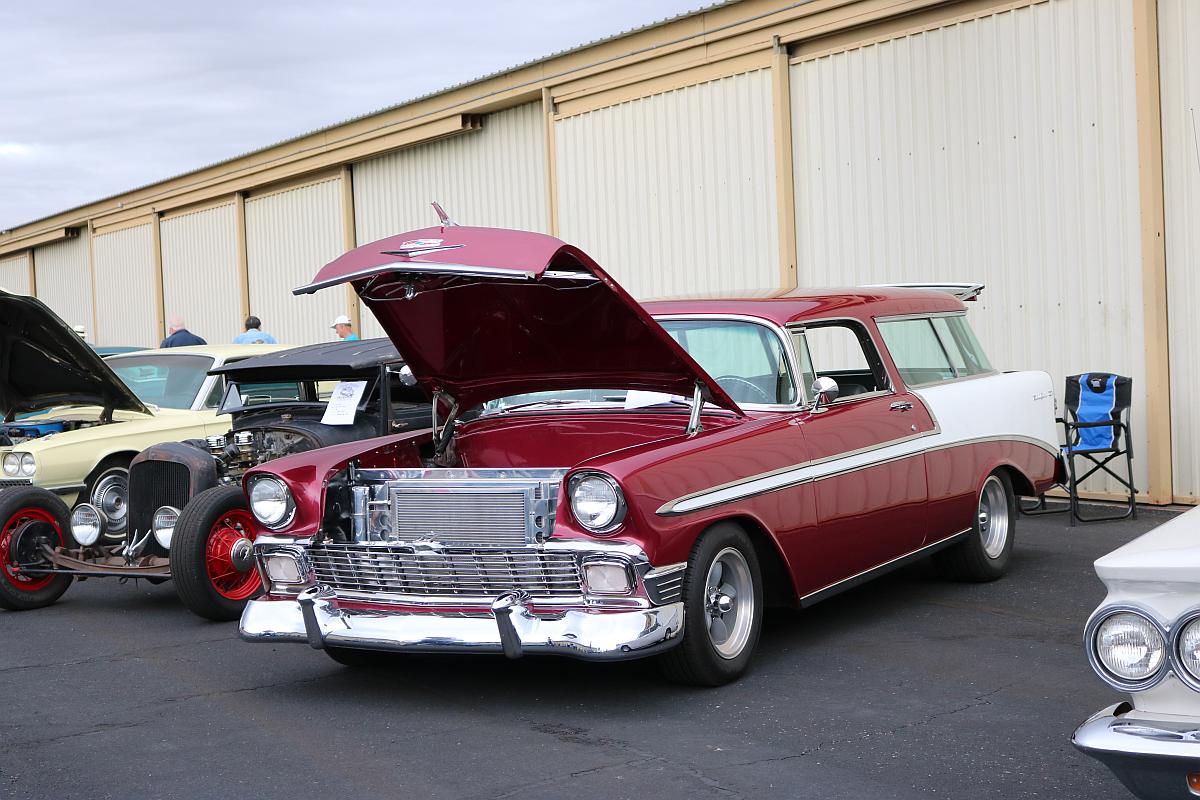 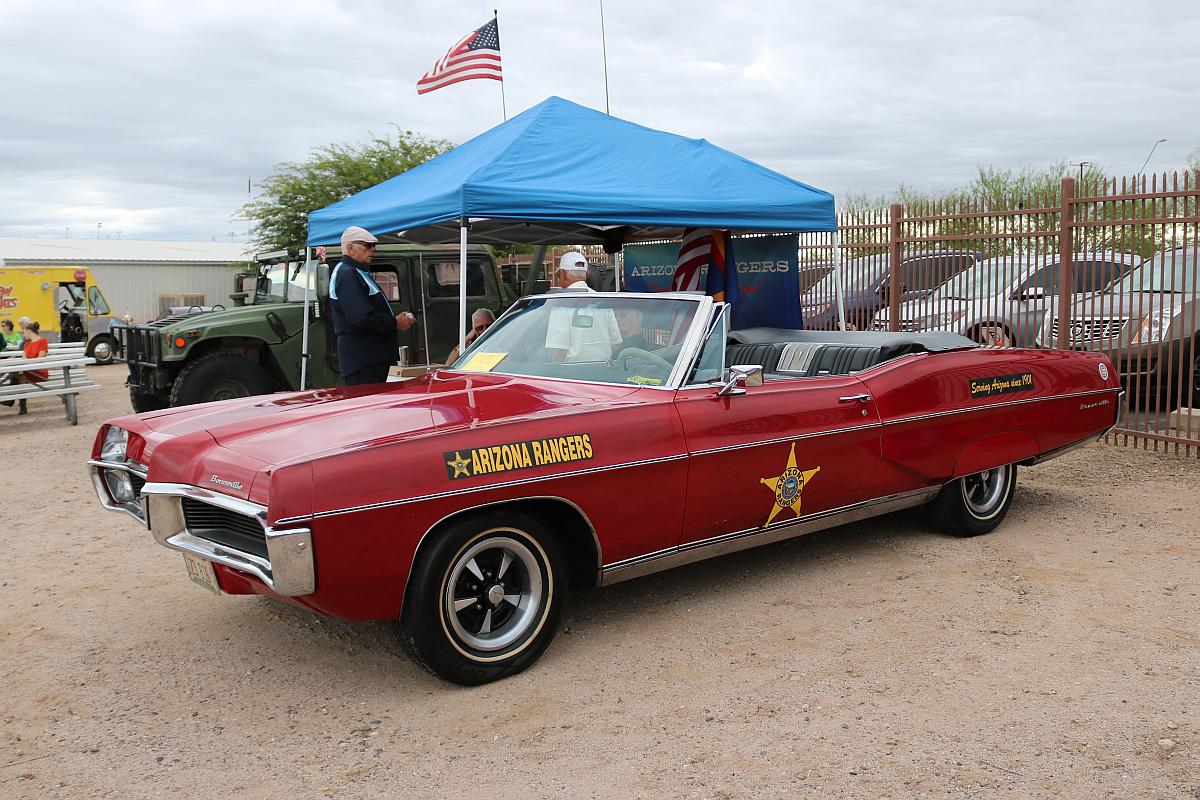 Here we see a clean classic 1956 Chevy Station Wagon which was one of the better nostalgia inducing displays. The Arizona Rangers were on hand to provide security and traffic control. They brought this lovely Pontiac Bonneville Convertible along with them. 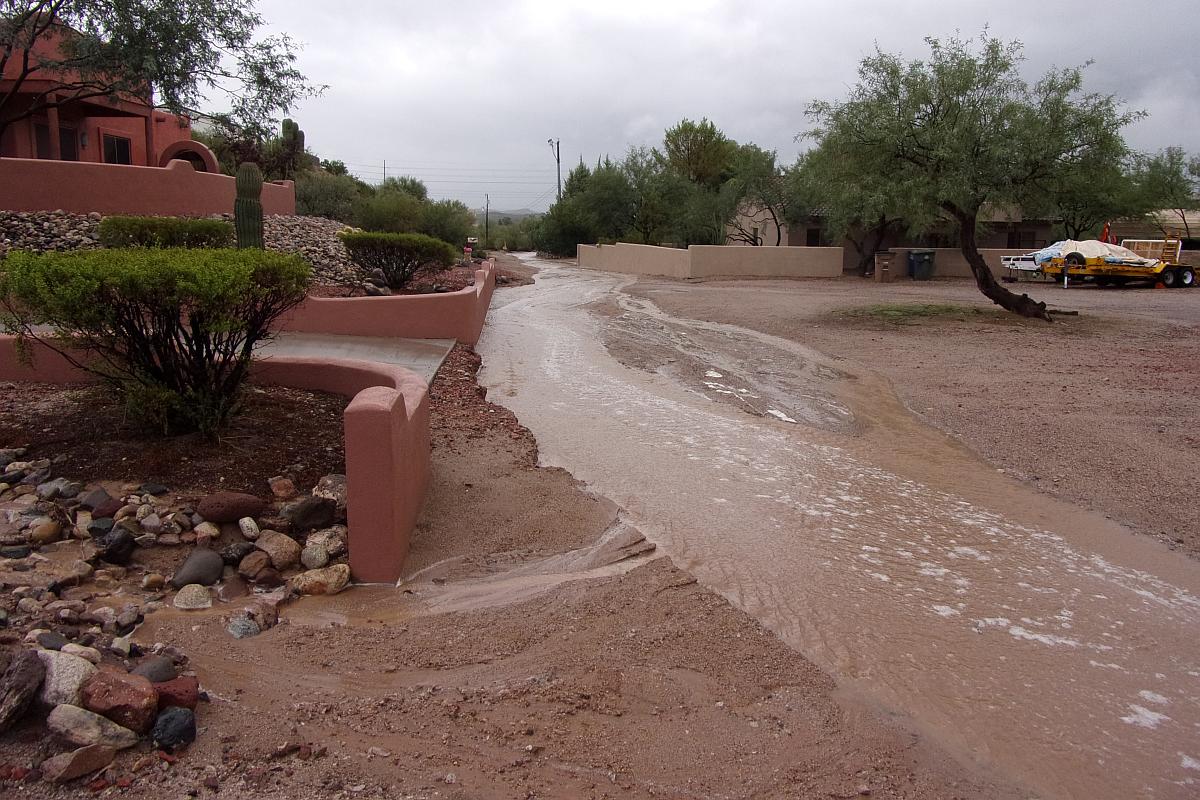 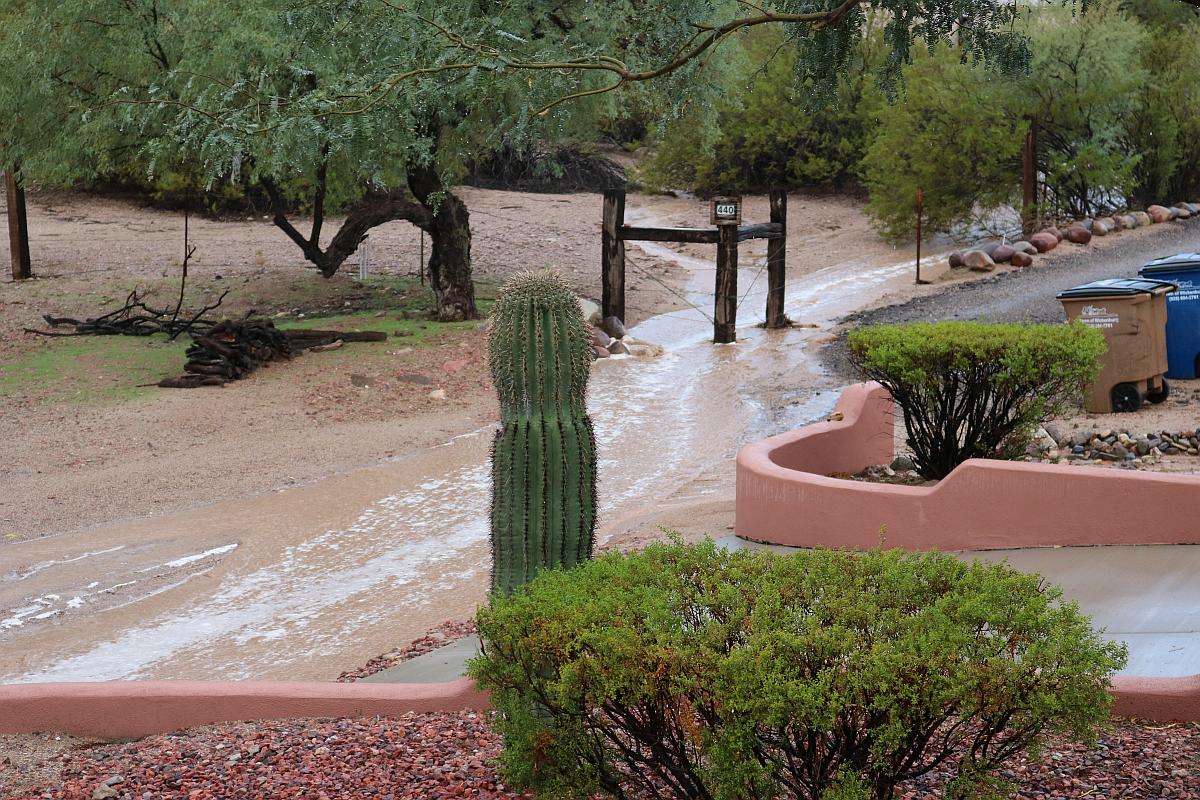 We were home and parked in the garage before the heavy rainfall began. I took the photo on the left during an interlude in the rain when we were out walking the dogs and Damsel took the one on the right from the courtyard. This is our usual flash flooding we get when there is a cloudburst.