Yesterday, 11/11/2022, Damsel and I attended the first part of the opening session of the 43rd Annual Wickenburg Bluegrass Festival Weekend Classic. The Everett Bowman Rodeo Grounds are hosting the Festival as usual this year. The Rodeo Grounds are also hosting food vendors and various other vendors like jewelry, folk art, crafts and some other merchandise. The T-shirt vendor sold us a hooded sweatshirt with this year’s festival logo freshly silkscreened on it (pictured above – clickable). We try and buy a T-shirt or a sweatshirt each year we attend the festival. 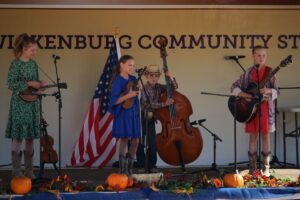 A group called The Arizona Wildflowers came on stage first to perform a set of tunes. These three sisters and (recently added) 8 year old brother performed some great tunes including some gospel and other favorite tunes. We thought they were great! In the (clickable) image above, you can see little brother almost dwarfed by the bass fiddle he was playing. Everyone in attendance seemed to enjoy their performance as much as we did.

We made the tour of the vendors to see what was available; as I mentioned before, we bought a Sweatshirt for me. We also bought a beautiful pair of Moonstone Earrings for Damsel. At this point, we were ready to head back home. We can’t leave the dogs alone for very long, so we said adios to the Bluegrass Festival until next year. 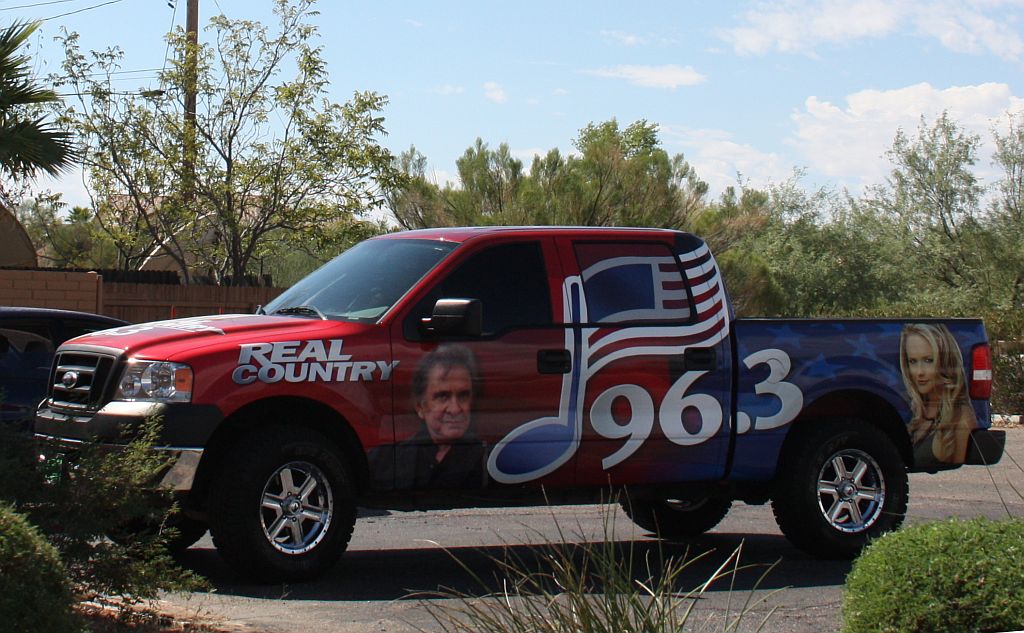 When we’re in the Phoenix/Wickenburg area, we listen to KSWG-FM 96.3 “Real Country” radio. The genre is country and western but the difference between this station and those we have in the Los Angeles area is that KSWG plays both old and new country hits.

While we seldom hear Johnny Cash and Merle Haggard in L.A. it is a regular thing to hear the old classic C&W stars in Wickenburg and Phoenix. They also play many of the current country music hits as long as they’re not that hip hop crap played on the L.A. C&W outlets.

As soon as we cross over the Harcuvar Mountain pass on US 60 in La Paz County, we are within the station’s coverage area. We then tune the SUV radio to 96.3 and enjoy the remaining 60 miles of the drive to our new home town while listening to Real Country. 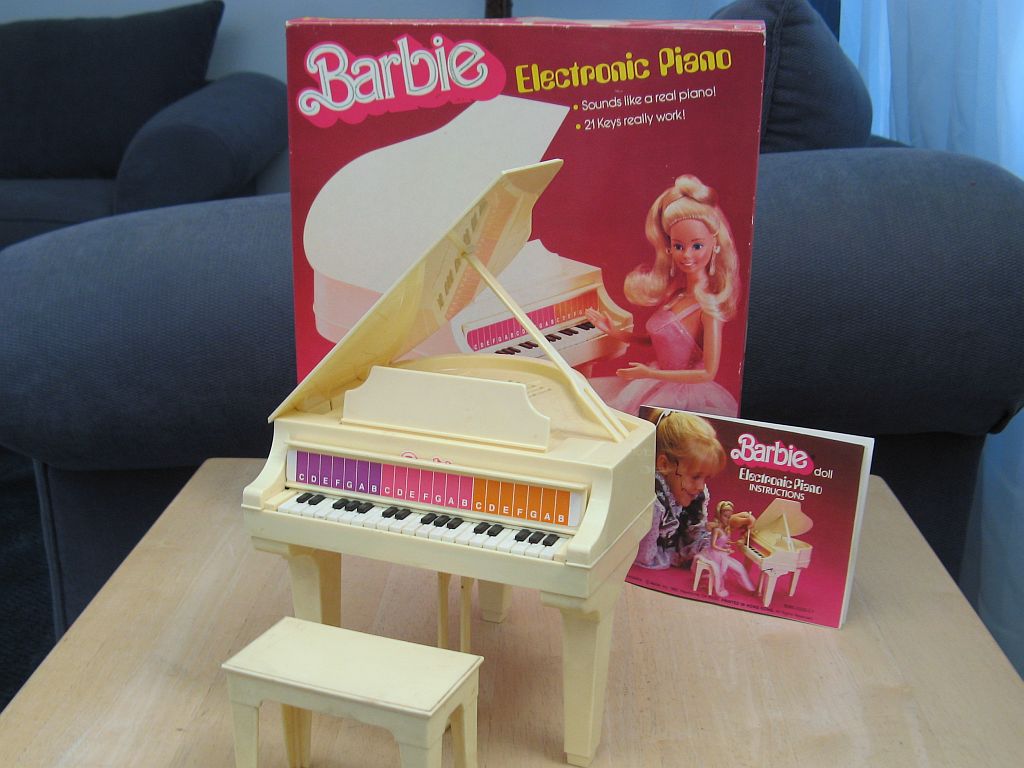 Why is this Barbie Piano special? Well, because, this one has provenance.

You see, back in 1980, I worked for Mattel Toys in Hawthorne, CA as an engineer in the preliminary design department. I designed electronics for prototypes of all sorts of toys, including remote control cars, self-guided racers, sound effects for a hot wheels airborne transport toy, and the piano sounds for Barbie’s Piano.

I collaborated with another prototype designer who did the mechanical development. My job was to develop an electronic piano sound. I actually got a patent for the ‘decay modulator’ circuit, which was the heart of the semi-realistic sound. When a key is struck, the tone fades out gradually just like a real piano.

When it came time to demonstrate the toy to Mattel’s president, we brought the model in, sat Barbie down on the bench and I made my first and only professional musical debut as I plunked out “Somewhere Over the Rainbow’ using Barbie’s hands on the keys. 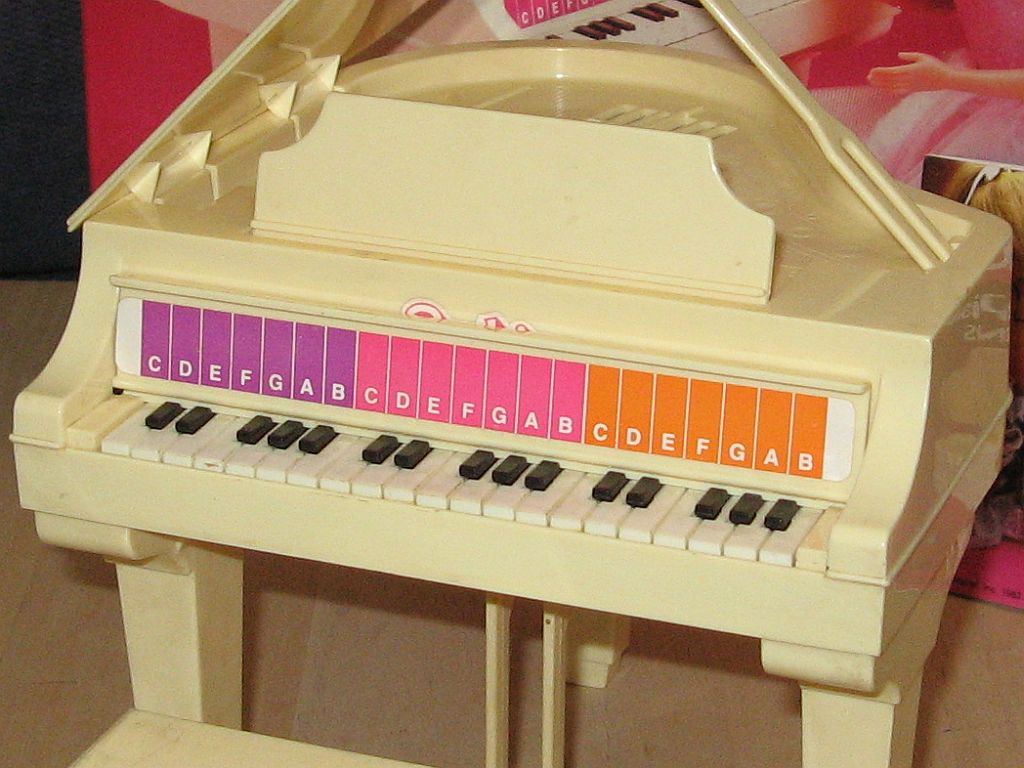 “I love it,” said the president as he clapped his hands with approval, “let’s get it into toy development and go with it!” After the piano went into production, even though I was not working at Mattel, they called me in and gave me this one when it was new.

I saw an original Barbie Piano on eBay today with a selling price of 160USD. And that was without the bench and the instruction/songbook. I imagine that this particular one might be worth a bit more with my signed statement about its development and my role in it.

While this one has never been owned by a child, I used to indulge my granddaughters and let them play with it. As a consequence, it’s not completely pristine and the little wands used to play the tiny keys are missing. A mistake, to be sure, but you should have seen the pride in their eyes knowing granddad invented this toy.

Cross-posted from our family blog.

Sorry for the thin blogging as of late. We’ve lost two computers in a week and trying to recover. The laptop lost it’s hard drive and the old workstation had a power supply failure (we think). Meanwhile, watch this short video of Damsel having fun at the range.

Maybe some of you folks have already seen this. A friend sent this to me today, and I had not seen it before. I grew up in the years just after WWII, my Dad fought in it and I found it deeply touching – so keep the tissues box handy . . .

The elderly parking lot attendant wasn’t in a good mood!

Neither was Sam Bierstock. It was around 1 a.m., and Bierstock, a Delray Beach, Fla. , eye doctor, business consultant, corporate speaker and musician, was bone tired after appearing at an event.

He pulled up in his car, and the parking attendant began to speak. “I took two bullets for this country and look what I’m doing,” he said bitterly.

At first, Bierstock didn’t know what to say to the World War II veteran. But he rolled down his window and told the man, “Really, from the bottom of my heart, I want to thank you.”

Then the old soldier began to cry.

“That really got to me,” Bierstock says.

Bierstock, 58, and John Melnick, 54, of Pompano Beach – a member of Bierstock’s band, Dr. Sam and the Managed Care Band – have written a song inspired by that old soldier in the airport parking lot. The mournful “Before You Go” does more than salute those who fought in WWII. It encourages people to go out of their way to thank the aging warriors before they die.

“If we had lost that particular war, our whole way of life would have been shot,” says Bierstock, who plays harmonica. “The WW II soldiers are now dying at the rate of about 2,000 every day. I thought we needed to thank them.”

The song is striking a chord. Within four days of Bierstock placing it on the Web http://www.beforeyougo.us/ , the song and accompanying photo essay have bounced around nine countries, producing tears and heartfelt thanks from veterans, their sons and daughters and grandchildren.

“It made me cry,” wrote one veteran’s son. Another sent an e-mail saying that only after his father consumed several glasses of wine would he discuss “the unspeakable horrors” he and other soldiers had witnessed in places such as Anzio, Iwo Jima, Bataan and Omaha Beach. “I can never thank them enough,” the son wrote. “Thank you for thinking about them.”

Bierstock and Melnick thought about shipping it off to a professional singer, maybe a Lee Greenwood type, but because time was running out for so many veterans, they decided it was best to release it quickly, for free, on the Web. They’ve sent the song to Sen. John McCain and others in Washington. Already they have been invited to perform it in Houston for a Veterans Day tribute – this after just a few days on the Web. They hope every veteran in America gets a chance to hear it.

GOD BLESS every veteran…and thank you !

CLICK THE LINK BELOW TO HEAR THE SONG AND SEE THE PICTURES:

It just occured to me that this lyric from the country music group Confederate Railroad could apply to the Junior Senator from New York:

Now all we have to do is ensure that the last part about her being gone comes true.