A group of airline personnel and friends plan to ride their bicycles from Dockweiler Beach, adjacent to LAX, to Washington, D.C., in tribute to the 33 airline crew members who died that tragic day.

From the Daily Breeze:

[Organizer] Thomas Heidenberger lost his wife, Michele, that day. She was a flight attendant on a plane destined for Los Angeles that crashed instead into the Pentagon.

There were 33 of them killed that morning, 33 flight attendants and pilots who were among the first to confront the terrorist hijackers of Sept. 11.

“It’s not about one person, one individual crew member,” he said from his home in suburban Washington, D.C. “It’s about all 33.

“We don’t know what happened up there. It’s all speculation,” he added. “But they were the first to confront the terrorists. They need to be recognized.”

The five bicyclists will leave April 2 on a route that takes them across 15 states and more than 3,500 miles. They chose to begin near Los Angeles International Airport because that was the destination of three of the four hijacked flights.
A small group of airline workers will set out from Dockweiler Beach early next month on a cross-country bike ride in their honor. The riders have given themselves 33 days to make the trip, one day for each of the crew members killed.

It’s a tribute first, but also a fund-raiser for the official 9-11 memorials and a salute to those who still work in the air. For its organizer, the ride is a chance to remind the nation of the full toll of the attacks.

[ read the rest of the story ]

When disaster strikes, our support goes to the Salvation Army. Actually, we support them even when there’s not an emergency. Local citadels do a lot of good in our communities for adult rehabilitation and other community services.

After September 11, 2001, and in the wake of the terrible 2005 Hurricanes, the American Red Cross seems to have missed their charter, and entertain “perks” and other nonsense. We’re turned off from them for the time being.

This is a part of an article that Captain Ed posted today:

When people donate to the Red Cross, as I have in the past, they expect their money to go to disaster relief or to supporting blood drives, not to get their executives high-paying speaking gigs or to allow them to rub elbows with Hollywood celebrities. This amounts to an abuse and deception on the part of the Red Cross, gaining donations — especially in the wake of 9/11 and recently with Hurricane Katrina — by using the pain and suffering of victims in order to support a glamorous work environment. As Harvard lecturer Peter Dobkin Hall notes, the Red Cross doesn’t need to spend money to raise awareness of the organization, as people “throw money” at them whenever disaster strikes.

This nice coin showed up in the mail after we contributed to Soldiers’ Angels.

This from the Salvation Army Newsletter:

The Story Behind the Red Kettlesâ€¦

The Salvation Army Captain in San Francisco had resolved in December of 1891 to provide a free Christmas dinner to the areaâ€™s poor. But how would he pay for the food?

Suddenly, his thoughts went back to his days as a sailor in Liverpool, England. On the Stage Landing he saw a large pot, called â€œSimpsonâ€™s potâ€ into which charitable donations were thrown by passers-by.

On the next morning, he secured permission from the authorities to place a similar pot at the Oakland ferry landing, at the foot of Market Street. In addition, a brass urn was placed on a stand in the waiting room for the same purpose. Thus, Captain Joseph McFee launched a tradition that has spread not only throughout the United States, but throughout the world.

By Christmas, 1895, the kettle was used in 30 Salvation Army Corps in various sections of the West Coast area. Shortly afterward, two young Salvation Army officers who had been instrumental in the original use of the kettle, William A. McIntyre and NJ Lewis, were transferred to the East. They took with them the idea of the Christmas kettle.

In 1898, the New York World hailed The Salvation Army kettles as â€œthe newest and most novel device for collecting money.”

Everywhere, public contributions to the kettle enable The Salvation Army to bring the spirit of Christmas to those who would otherwise be forgotten – to the aged and lonely, the ill, the inmates of jails and other institutions, the poor and unfortunate. In the United States, The Salvation Army annually aids more than 5 million persons at Thanksgiving and Christmas.

Behind it all, though, is the same Salvation Army message, â€œSharing is Caring.â€

Hey! Wanna get a nice pre-Christmas endorphin high (that’s ‘feel good’ to you non-nerds)? Then follow this simple regimen . . . Damsel and I did and it’s a great feeling!

I guarantee you will be glad you did!

16 Nov 2005 by CapnBob Charity Military
UPDATE: As you read this, please consider donating to the Salvation Army, who have been providing relief to victims of Hurricane Katrina and will, soon, provide relief to victims and first responders to Hurricane Rita.

The doorbell rang and Damsel went to the door to peer through the little porthole to see who was there. Looking out, she saw an older man dressed casually, with a grocery bag. Damsel is very cautious and surveyed the visitor for a few seconds before turning on the green light to open the door.

It turned out that it was Mike White from our local Salvation Army Citadel. Mike presented Damsel with a box of six of the ‘Famous Doughnuts‘ as a treat for us for our support over the years. Wow! Doughnuts!

Mike’s visit inspired me to look into the ‘Famous Doughnuts’ and I found this on the Southern California Salvation Army webpage (click on the ‘Famous Dougnnut’ display ad): 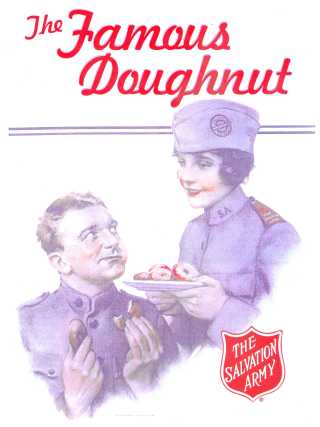 On The Front Lines

The Salvation Army won its recognition during World War I for its work overseas. However, it was the doughnut that caught the doughboy’s fancy.

In August 1917, fighting raged near Montiers, France, as soldiers huddled in camp – hungry, weary and drenched by 36 consecutive days of rain. In a tent near the front lines, Salvation Army “lassies” (young, female Salvation Army members) made doughnuts by filling a refuge pail with oil. They made dough with left over flour and other ingredients on hand, and used a wine bottle as a rolling pin. With a baking powder tin for a cutter end a camphor-ice suck tube for making the holes; doughnuts were fried – seven at a time – in soldier’s steel helmets on an 18-inch stove. (Later, a seven-pound shell fitted with a one-pound shell was used to cut out the doughnut holes.)

Rain fell continuously and the water-soaked tent collapsed, but the 100 doughnuts made that first day were an immediate success. Soon, as many as 500 soldiers stood in muck outside the resurrected tent, waiting for the sweet taste of doughnuts.

Following the war, the returning “doughboys” brought back the taste of doughnuts with them – the doughnuts that The Salvation Army lassies had fried and served for them in France.

The Salvation Army Famous Doughnut is again on the front-lines of war. This time around, however, the battle is being fought against the unfair penalties of poverty: hopelessness, homelessness and hunger. You can help The Salvation Army replenish its financial ammunition by purchasing a box of The Famous Doughnut, available now in your local Ralphs Grocery Stores.

Now, I don’t want to encourage anyone to eat a lot of these, but don’t the Salvation Army Doughnuts look good?