I received the following from AZCDL in a email this evening. I had read about this item elsewhere but now it’s in my inbox. Our local High School (The Wickenburg Wranglers) has possibly the ONLY public school shooting sports team of its kind in the entire US of A. Plus a couple of the team members are invited to shoot in a national event coming up.

I’m not printing the entire AZCDL blurb here, but the full story and support information can be found in the linked article at the Wickenburg Sun.

Two members of the Wickenburg (Arizona) High School (WHS) Rifle Team, which may be the only recognized public high school high-power rifle team in the USA, have been invited to join the United States F Class National Under 25 Team. WHS teams have earned four national records in F Class.

Since the team is a public-school activity, donations are fully tax-deductible to anyone in the USA. However, Arizona residents get a deal that’s hard to refuse: you can write off the full amount of your donation against your state income tax liability… not just as a deduction, but as a tax credit.

To clarify, if you usually owe the state of Arizona $200 for state income tax each year, you can make a donation of $200 to the Wickenburg High School Rifle Team and owe the state nothing next April ($400 for couples). If those taxes have already been withheld from your paycheck, you will actually get a refund from the state!

It’s also a terrific way to send a message to both the school system and to the state tax authorities about where their priorities should be. Some years back, the Wickenburg school board took official notice in their minutes that the Rifle Team was neck and neck with the football team for the most popular recipient of tax credit funding. It was that sort of community acceptance that caused them to upgrade the school rifle “club” to a recognized “sport.”

Donations can be made immediately online – you no longer have to cut a check or even lick a stamp. Visit: https://wickenburg.revtrak.net/tek9.asp

Damsel and I are proud to contribute to THE WICKENBURG HIGH SCHOOL RIFLE TEAM. 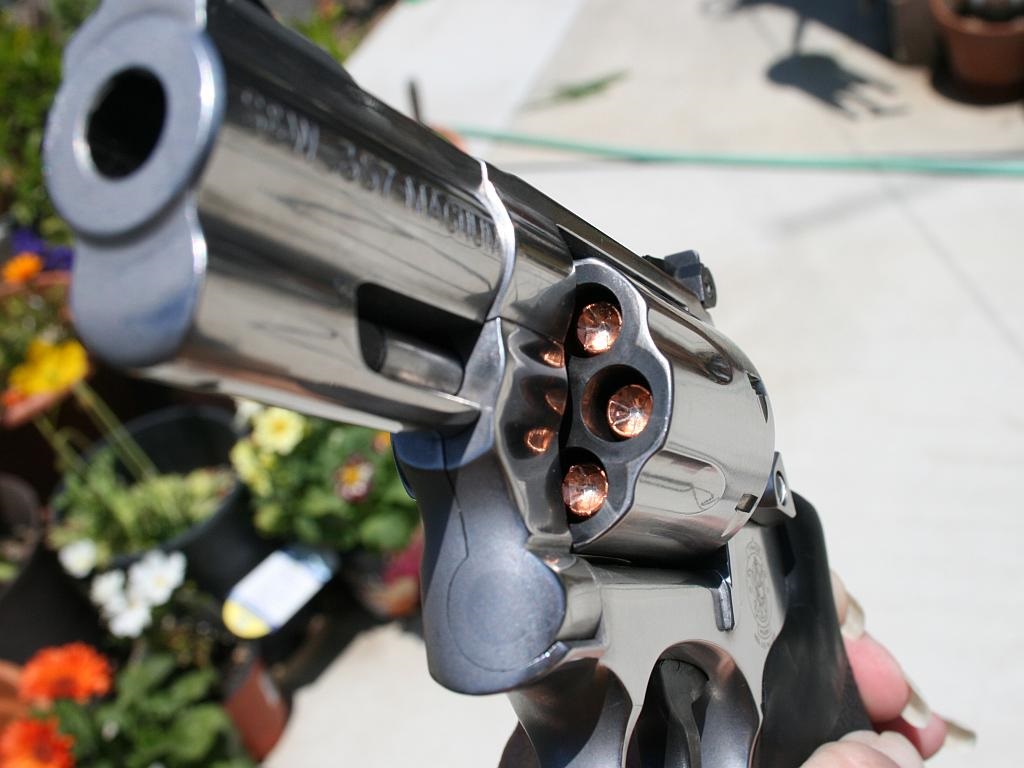 Yesterday, I learned about Arizona’s status as the best state for gun owners. The Arizona Citizens Defense League notified us about the Guns and Ammo Magazine survey via email and FecesBook®.

For the SIXTH consecutive year Guns and Ammo magazine has rated Arizona as the #1 state for gun owners. The ratings are published in the November 2018 issue. Click here to view a copy of the ratings.

States were measured by the following criteria:

Arizona scored a perfect 10 in the numerically rated categories and a YES in the Magazine Capacity Unlimited column. The citizens of our state owe our great score to the relentless efforts of the Arizona Citizens Defense League who, since 2005, have organized and lobbied for our Constitutional and God-given rights to self defense.

Open the G&A Report (.pdf) to see where your state is ranked by Guns and Ammo. 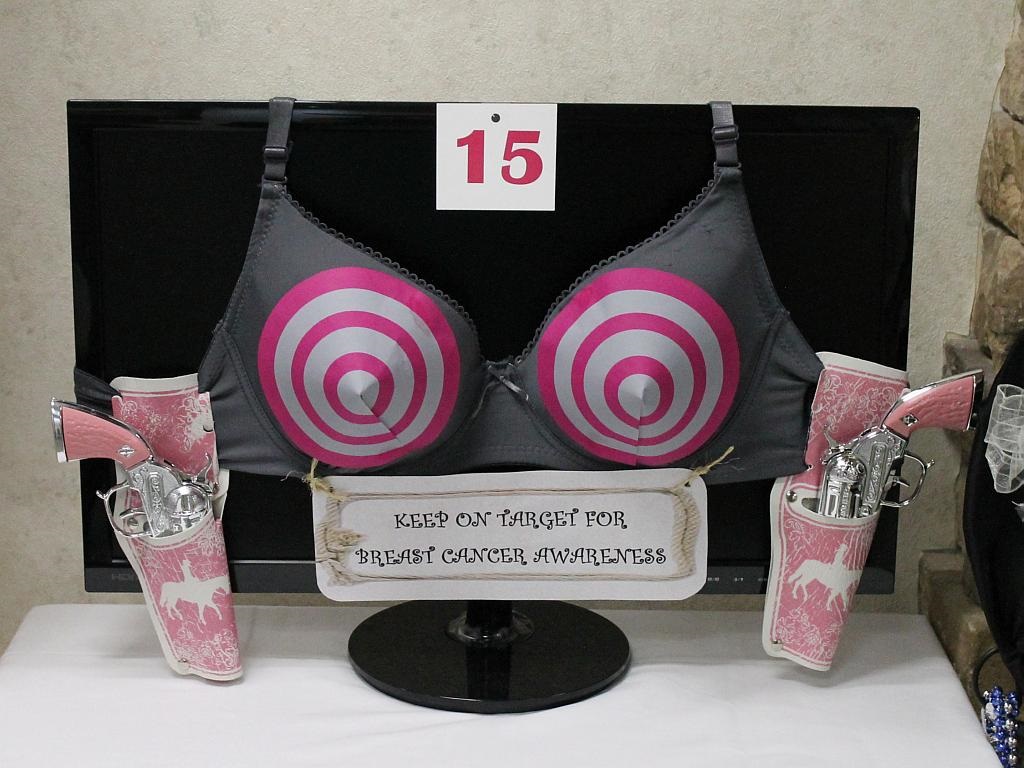 The Wickenburg Community Hospital sponsored a Bra Decorating Contest to highlight Breast Cancer Awareness month. There were a lot of nice entries, but my favorite was this brilliant presentation of pink targets and pink six-shooters in pink holsters. I loved it (and it got my vote). How could you not if you are into guns and target shooting.

There must have been a couple of dozen entries, most of them very creative and beautiful. The Arizona Flag and Red/White/Blue bra was very nice too. Click here to see the Arizona decorated bra. 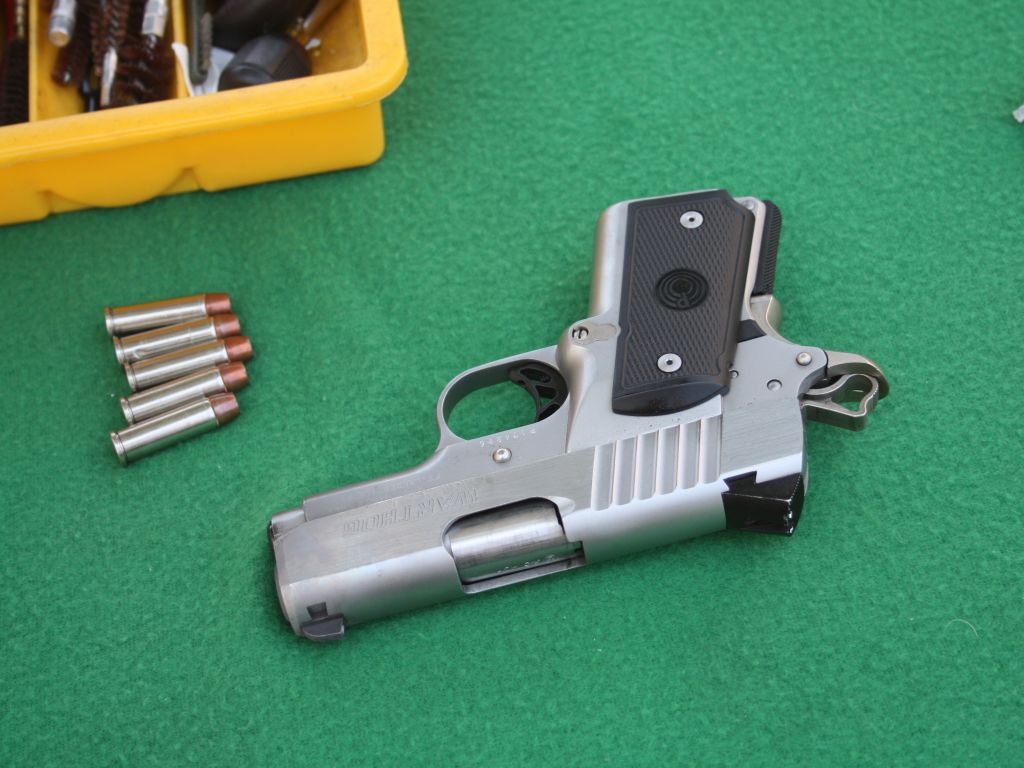 We went shooting today. Since we have been arranging for our new Arizona home, we have been remiss in going to the range. When we came home, it was time to get out the gun cleaning toolbox and scrub off all the crud.

I took this picture of my Warthog after I got her all cleaned up. The .38 special rounds are for my other gun. Click on the image to enlarge.

We had a lot of fun but today was our last trip to Sharpshooter.

I took this shot at the Gun Blogger Rendezvous last September. Mike is familiarizing Damsel with the competition pistol he uses. We recently saw him in a sequence on Downrange TV using this gun. To the left you can see Kevin and Chuck enjoying the outing. We’re expecting to attend again this year and join bloggers like Kevin, Mike and Chuck in an excursion to the shooting range. Click on the image to enlarge. 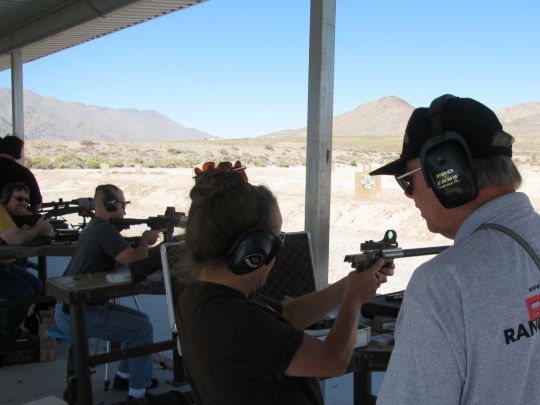 For some GBR nostalgia, go here. 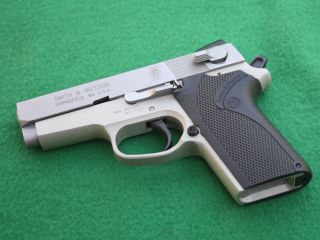 We decided to take the 9mm pistols to the range today. We brought a hundred rounds of 9×19 ammo. I brought my Glock 26 subcompact and Damsel brought her S&W 908s. The latter being a little workhorse with a single-stack 8 round magazine. This nice little gun has been one of our most reliable guns but seldom sees much praise when we post about shooting.

We actually have two of these, a ‘his’ (in black) and ‘hers’ – this one – the ‘s’ after 908 indicates ‘silver’ finish. As I said before, these guns have been pretty reliable. We have had them for several years, shoot them regularly, and have only replaced the slide springs and spring guides in them after one of the two was showing some wear.

We also took two shotguns today – the 12 gauge Remington 870 Security Shotgun and Damsel’s 20 gauge shotgun. As usual we took 25 rounds for each gun. You can read more about shooting them here.