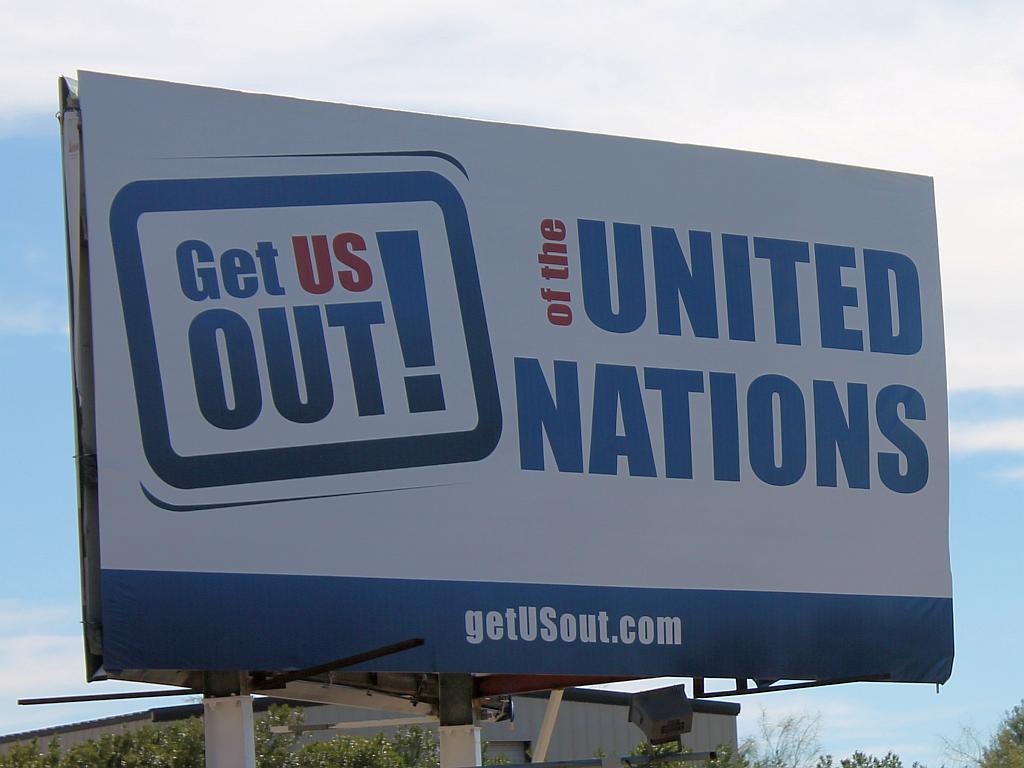 As you drive southeast on US 60 going toward Phoenix, you will pass the sign seen above just as you are leaving Wickenburg. This sign is the replacement for another message recently seen at this same location.

Now that there has been a change in the direction of our country’s leadership, perhaps there will be enough collective wisdom to move in the direction of defunding and kicking the UN out of Turtle Bay. Send it off to Geneva where it will hopefully wither and die. The UN has only been a drain on our resources and has provided nothing in the way of benefit to the United States. Actually, its actions have been continually detrimental to our view of how the world should be.

Why we have put up with the UN for so many years is beyond my comprehension. It is a malignant growth and a cancer should be cut out of a body to begin healing and recovery.

We created the image above on the occasion of the UN’s 60th Birthday. Now that the Obamessiah has graced the despotic league with his presence, the UN remains just as ineffective and corrupt as ever, maybe more.

Charles Krauthammer dissected Obama’s bragging and condescending words as well as anyone could:

This speech hovered somewhere between embarrassing and dangerous. You had a president of the United States actually saying: “No [one] nation can or should try to dominate another.”

I will buy the “should try to” as kind of adolescent wishful thinking. But “no [one] nation can dominate another”? What planet is he living on? It is the story of man. What does he think Russia is doing to Georgia?

But the alarming part is what he said in the same paragraph where he said that it makes no sense anymore “the alignments of nations that are rooted in the cleavages of the Cold War.”

So he is saying that is all now irrelevant. What does he think our allies are going to think who hear this?

Obama’s speech is alarming because it says the United States has no more moral right to act or to influence world history than Bangladesh or Sierra Leone.

It diminishes the United States deliberately and wants to say that we should be one nation among others, and not defend the alliance of democracies that we have in NATO, for example, or to say — as [did] every president who goes before Obama — that we stand for something good and unique in the world.

And it [NATO] is not the equivalent, for example, of the alignment of Chavez with Ecuador and Bolivia and Nicaragua and Russia and Cuba and Iran…..

This one was worse: When he [Obama] boasted about how he had reversed the course of America, and those who doubt our character should look at our actions, among the actions he cited was our joining the U.N. Human Rights Council, which is led by the worst human rights violators on the planet. It is an Orwellian, farcical organization. The idea that we should be on it is regrettable, but the idea that we should be boasting about it as an American achievement is a scandal.

None of them are champions of peace, yet they have all been awarded the Nobel Peace Prize.

The Nobel Peace Prize has been a joke for years. Consider the following with regard to the discretion of the prize award selection committee:

They should rename the prize to something like the Nobel Anti-American Prize and be done with it.

Over the weekend in Saint Louis at the NRA Convention, former UN Ambassador John Bolton told 3500 banquet attendees that foreign anti-gun interests are intent on depriving Americans of their second-amendment right to own and bear arms. Bolton cited a 2001 UN conference on small arms and light weapons wherein the majority of participants decided that private ownership of weapons should be banned worldwide.

Bolton also said that US proponents of gun control are turning to international interests in their efforts to deny gun ownership. Bolton said the United States’ bottom line is that this country will not agree to anything that infringes on the constitutional right to bear arms.

“Had the NRA not come forward â€¦ one could only guess what our State Department bureaucracy would have done,” he said.

The United Nations instead should focus on nuclear threats from Iran and North Korea, he said. Negotiations with these countries are more dangerous than productive, Bolton said.

The United States should not make general contributions to the United Nations, Bolton said. Instead, he said, “We should pay for what we want and expect to get what we pay for.”

Let me start out by quoting a famous American:

â€œIf you beat your sword into a plowshare, you will probably end up plowing for someone who kept their sword.â€ â€” Samuel F.B. Morse

The UNODC, the United Nations Office on Drugs and Crime, is urging Colombians to turn their guns into guitars. No, really, that’s what they’re saying! Not only that, but they say if all nations (including the US) gets rid of guns then the world will be safer.

Right – safer for the people who keep their guns, that is.

END_OF_DOCUMENT_TOKEN_TO_BE_REPLACED

I read an interesting report written by John L. Daly about the emergence of the “hockey stick” paradigm. The “hockey stick” (since the shape of the graph resembles one) graph emerged in 1995 and purports to depict average global temperatures over the last 1000 years or so. The basis of this paradigm, however, can be shown to be flawed.

At the behest of the United Nations’ Intergovernmental Panel on Climate Change (IPCC), Dr. Michael Mann of the Department of Geosciences, University of Massachusetts wrote a report containing the questionable climate graph. 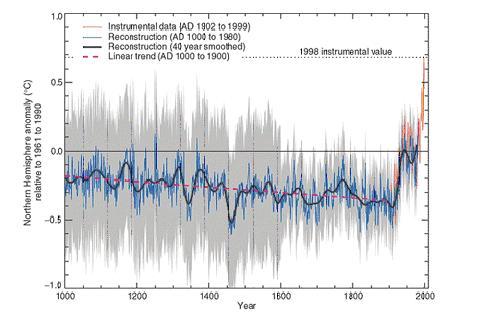 To get the graph, the good doctor grafted data obtained from tree rings worldwide onto the more recent average global temperature data. This is inherently not a good practice to mix data from two completely different sources. Moreover, tree rings are influenced by many factors other than temperature, and the conclusions probably contain errors. Nonetheless, the IPCC immediately embraced the report as evidence that there was “a discernible human influence on global climate.”

John L. Daly in his article The “Hockey Stick” – A New Low in Climate Science presents 14 exhibits of climate science that completely discredit the “hockey stick.” Daly also shows how the biased media can make “stars” out of their favorite scientists as they did with Dr. Mann. This “star” status reduces science to the level of Hollywood, according to Daly.

The graph below shows worldwide temperatures since the last ice age which occurred over ten thousand years ago. The data used to plot this graph have been assembled from reliable scientific research. Notice that over the last 1000 years (see inset), the temperature dropped from the medieval warm period down to the “little ice age” and rebounded since that time. Why, then, does the “hockey stick” not show this? The answer is simple — the “hockey stick” contains flawed data prior to 1900 AD. Notice also that there’s nothing remarkable about the current warming bubble. If solar activity continues to increase, there’s not much anybody can do about it, but will it be that bad or will we simply adapt? 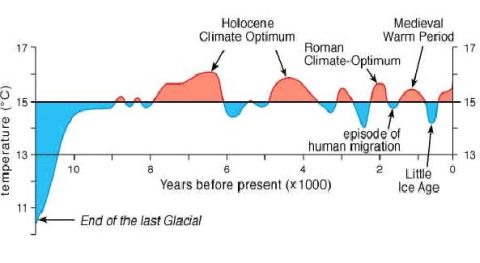 Supporters of the “hockey stick” defend their model by suggesting that the little ice age and medieval warm periods were confined to the northern hemisphere or to Europe. That’s simply not the case according to Daly’s report and to NASA – I prepared a three-phase review on why solar activity is the primary cause of climate fluctuation. In that review, I utilized NASA’s graphics and sunspot data. Together, these demonstrate the world-wide nature of climate fluctuation. Conclusions that I made in that review apply equally to this subject:

And one more conclusion: 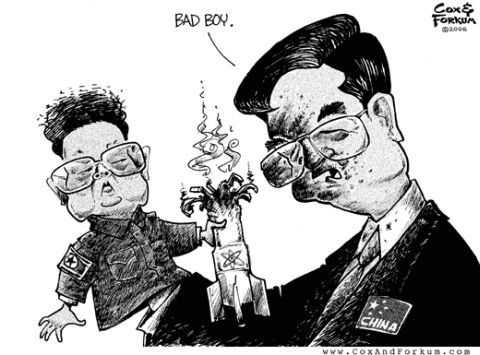 MVRWC reveals the truth about the NOKO explosion. Click it – very funny.