Here are some comments from a couple of folks after oral arguments in the landmark second amendment D.C. vs. Heller case before the Supreme Court earlier this week. The case is a challenge by the District of Columbia to overturn a ruling by a federal court that their total ban on handgun ownership is unconstitutional.

I was at the Supreme Court [Tuesday], and based on what I heard, I have every expectation that the Court will soon restore the Second Amendment to the District of Columbia.

Everything I saw in court shows the District’s ban on functional firearms is out of sync with American history. The arguments today clearly indicated the Second Amendment is an individual, and not a collective, right. The District’s attorneys spent their time swimming upstream against the U.S. Constitution.

Alan Gura, attorney for Heller et al, made these comments in response to criticism about his remarks regarding continuing the ban on machine guns:

The solution to 922(o) will have to be political in the end. The fact is, outside the gun community, the concept of privately owned machine guns is intolerable to American society and 100% of all federal judges. If I had suggested in any way — including, by being evasive and indirect and fudging the answer — that machine guns are the next case and this is the path to dumping 922(o) — I’d have instantly lost all 9 justices. Even Scalia. There wasn’t any question of that, at all, going in, and it was confirmed in unmistakable fashion when I stood there a few feet from the justices and heard and saw how they related to machine guns. It was not just my opinion, but one uniformly held by ALL the attorneys with whom we bounced ideas off, some of them exceedingly bright people. Ditto for the people who wanted me to declare an absolute right, like I’m there to waive some sort of GOA bumper sticker. That’s a good way to lose, too, and look like a moron in the process.

I think Heller got himself a pretty good attorney.

Finally, there is this viewpoint shared by anti-second amendment gun haters: 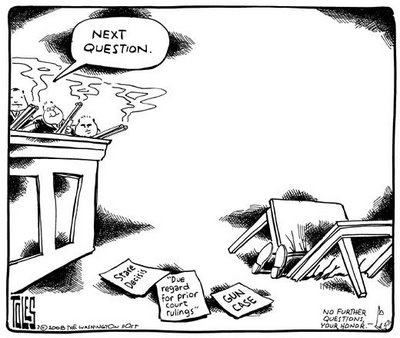