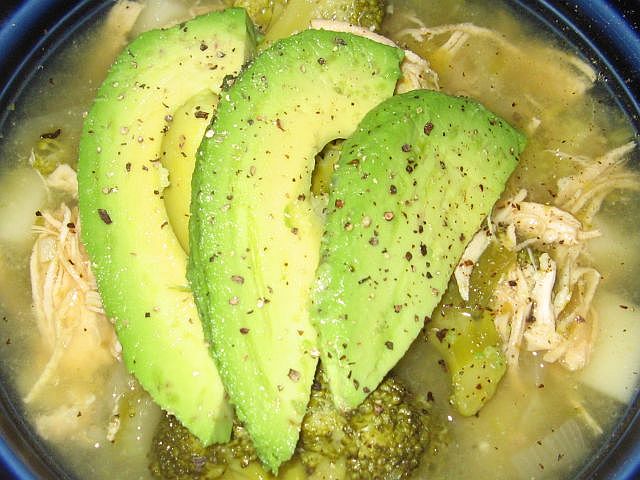 Start out with a couple of large boneless skinless chicken breasts. Cover the chicken with chicken broth in a pan and poach for about 30 minutes or until well done. Remove and set the chicken aside to cool. Put four large tomatillos (or enough for about a half-pound) into the hot broth and cook for about 10 minutes. The tomatillos will be done when the skins become translucent – you can tell by the change in color.

Put the two Anaheim chili peppers directly on a burner set to low heat on the stove top. Turn the peppers as the outer skin becomes singed to blacken all sides. After the skin is singed, cut the peppers lengthwise into several slices. Scrape out the seeds and discard. Take a table knife and remove the singed skins and discard. Chop the remaining chili pepper flesh into half-inch squares.

Next, shred the chicken with a couple of forks. Season with salt, pepper and ancho chili powder. Put into the crock pot with diced potatoes, broccoli florettes, coarsely chopped celery, chopped onion, the chili pepper squares and a couple cloves of minced garlic. Transfer the chicken broth and the tomatillos into a blender and puree. Add pureed tomatillos to the crockpot. Add enough additional chicken broth to cover the ingredients along with a tablespoon of flour. Cover the crockpot and cook on high for about four hours. Serve in bowls and garnish with freshly sliced avocado slices. Season to taste.

Delicious and waistline friendly. Serves four to six. Click on the image to enlarge.